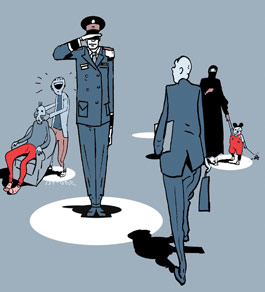 IN NOVEMBER 2004, Lt. General Ricardo Sanchez came to a luncheon at my professional home, the LBJ School of Public Affairs. I attended and asked some inconvenient questions. It was an inconsequential exchange, but two weeks later I received a surprising invitation: Would I fly to Germany in February and speak to the leadership of the Army V Corps about the operational conditions of Iraq? I have no military experience, and have never been to Iraq, while many in my audience—mostly generals and colonels—had spent over a year there. But of course I went. My unstated assignment was to say some inconvenient things, which may have otherwise gone unsaid.

Inconvenience has since gone public, big time. Back in November, Rep. John Murtha (D-Pa.) gave a breakthrough speech, describing the troops as “stretched thin”: “Recruitment is down, even as our military has lowered its standards. Defense budgets are being cut. Personnel costs are skyrocketing.… Choices will have to be made.” At the same time, Murtha added, success in Iraq is very remote. “Oil production and energy production are below pre-war levels. Our reconstruction efforts have been crippled by the security situation. Only $9 billion of the $18 billion appropriated for reconstruction has been spent. Unemployment remains at about 60 percent. Clean water is scarce.… And most importantly, insurgent incidents have increased from about 150 per week to over 700 in the last year.… Since the revelations at Abu Ghraib, American casualties have doubled.”

For this, Cheney blasted him, but then it emerged that Murtha’s crime was tipping the administration’s own hand. It appears we are beginning a long, slow, painful retreat from Iraq.

But are we drawing the full and correct lessons from this disaster? Some former liberal hawks now take refuge in what Sam Rosenfeld and Matthew Yglesias call “the incompetence dodge”: that things would have turned out okay if only the neocon cabal were not in charge. Such libhawks would withdraw U.S. forces only to use them again, in another (but, of course, more justified and better planned) war. And that would mean a bigger war, with a bigger force on the ground, and a much bigger budget to support it.

But the reality is that the Iraq war could not be won by a force of any size or by an expenditure of any amount. Against determined opposition, occupations in the modern world cannot prevail. They haven’t for more than 60 years. The reason is that the basic economics of warfare have changed. Here are six reasons I gave to the officers in Germany—a pure exercise in stating what they already knew.

Sixty years ago the then-colonial world was mostly rural; today it consists of enormous cities. These urban jungles of concrete provide vast advantages—concealment, fortification, communication, intelligence—to the defender. In cities, troops on patrol are isolated and exposed; their location is always known, while that of the enemy is not. More patrols mean more targets. The superior firepower of the occupiers just means that a lot more innocent people get hurt.

So does the “crude” weaponry of insurgents. Car bombs, booby traps, and suicide belts are cheap and effective. Detonated by radio or wire from within a nearby building, roadside bombs equalize the insurgent and the invader. Detonated by fanatics, suicide bombs are extremely difficult to stop. Shaped explosives, which have started to appear in Iraq, are able to burn right through armor plate. To prevent these attacks means emphasizing force protection; this gets in the way of everything else.

The violence in Iraq is horrific, but it’s the media that makes it intolerable. Indeed, the violence is horrific only by modern standards. To truly cow a colonial population (as in British India in 1857, or on the American plains in the late 19th century) requires mass murder on a far larger scale. The presence of the media makes this most inconvenient. As we demonstrated at Fallujah, the sure way to subdue a hostile city is to destroy it. But that’s no way to win a political war back home—or hearts and minds in Iraq.

Jet travel is a military mixed blessing. Today’s army works on rotations; soldiers are deployed for about a year and then (in principle at least) they come home. When that happens, local liaisons and intelligence relationships must be rebuilt. On the other hand, if soldiers are denied the right to rotate home, their morale is going to suffer far more than in the old days when there was no such expectation. Email and blogs make sure that morale problems get home fast when the soldiers do not.

As if that were not enough, war today cannot escape the free market. When we invaded Iraq, the borders collapsed and import restrictions were eliminated. Imports surged, notably of electrical appliances like air conditioners and refrigerators. By the time the electricity supply was rebuilt, demand had skyrocketed, and the power could run for only a few hours a day. Without control over electrical demand, the reconstruction effort was crippled, and the Americans couldn’t win the Iraqi people’s respect and support. They were expecting miracles, after all, and they didn’t get them.

Finally, there has been a fundamental change of expectations: call it the presumption of independence. The British may have believed that their empire would always be the “dread and envy of them all,” but today no one believes the American presence in Iraq can endure over the long term. So unless you are in a safe zone (like Kurdistan) or part of an exiled elite with a posh flat in London, it does not pay to cuddle up to the occupying power. The retribution could be most unpleasant.

These are now the fundamental facts of wars of occupation. They tell us that foreign military power cannot long prevail over the territory of a people—in this case, the Sunnis of central Iraq—who are prepared to resist it to the death. This does not necessarily mean that the new Iraq will collapse when we leave. But if we cannot defeat the insurgency, then the insurgents will have to be accommodated, somehow, politically. Or else we leave the country to fight it out even more brutally in our absence.

We should have known we’d face this situation. In tiny East Timor, a ragtag band of resisters harried the Indonesian army for more than 25 years; that band (splendid people, by the way) now runs the world’s newest independent state. In Afghanistan, U.S.-assisted guerrillas drove out the Red army; their successors now make most of the country ungovernable. In Chechnya, the country has been destroyed but the rebellion hasn’t been subdued. And then there was Vietnam.

During the Cold War, we ringed the world with bases—but always in alliance with existing governments that were legitimate, at least up to a point. One may disapprove of the regimes we supported, but this model for the projection of military power works. It is called “containment.” It works as long as the host regimes remain viable and as long as the military power it projects isn’t tested in actual combat. When these conditions failed—in Iran, in the Philippines, in Vietnam—so did the strategy.

The successful use of military power—as Mao Zedong understood when he called America a “paper tiger”—entails a large element of bluff. Vietnam deflated the image that American power could never be challenged. To some extent, the Gulf War of 1991 restored that image, but the restoration was achieved by the limited aims and quick termination of that war. The Clinton successes in the Balkans came in part because all sides bought this lesson of the Gulf War. (With Serbia, the bluff came close to being called again; the Kosovo bombing campaign took 80 days and Russian diplomacy rescued us in the end.)

But now Iraq has once again exposed what military power cannot achieve, short of nuclear weapons. Iran and North Korea have taken notice. Meanwhile, our friends, the Europeans and the Japanese, must be asking themselves: Exactly what sort of security does the American alliance buy, and at what price?

Bush and Cheney have done more than merely bungle a war and damage the Army. They have destroyed the foundation of the post-Cold War world security system, which was the accepted authority of American military power. That reputation is now gone. It cannot be restored simply by retreating from Iraq. This does not mean that every ongoing alliance will now collapse. But they are all more vulnerable than they were before, and once we leave central Iraq, they will be weaker still. As these paper tigers start to blow in the wind, so too will America’s economic security erode.

From this point of view, the fuss over whether we were misled into war—Is the sky blue? Is the grass green?—stands in the way of a deeper debate that should start quite soon and ask this question: Now that Bush and Cheney have screwed up the only successful known model for world security under our leadership, what the devil do we do?