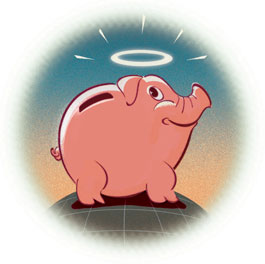 As a consumer, I’m conscientious to the point of near paralysis—I drive a Prius, buy organic, snack on fair trade chocolate bars, and stock my bathroom with recycled toilet paper. At the same time, I’m self-employed, have no pension or disability insurance, and am the parent of a kid who will probably want to go to college one day. I want what money I’ve managed to sock away to do good, or at least not be complicit in doing evil, but I don’t want my ideological purity to send me to the poorhouse. Hence my mixed feelings about the trend toward socially responsible investment funds, which screen out companies with bad environmental or social track records and work to improve the behavior of others by shareholder advocacy.

SRI-managed assets are growing at an astonishing rate, totaling $2.3 trillion last year, and the idea of applying an ethical overlay to investing is becoming increasingly popular with mainstream money managers. The SRI movement is now large enough to have spawned the inevitable backlash—socially irresponsible investments like the Vice Fund, which limits its portfolio to SRI pariahs: alcohol, gambling, defense contractors, and tobacco, or as the fund’s former adviser put it, “booze, bets, bombs, and butts.”

It’s testimony to our ambivalence that my husband and I have invested in three SRIs, the Vice Fund, and an energy fund that contains both oil and coal. Performance varies, but since the dot-com bust, my SRI investments have earned only slightly more than a savings account. So when my husband said he wanted to buy into oil last year, I couldn’t argue with his logic, which was: “We’re doing our part to curb global warming. If other people insist on driving SUVs, why not profit from their folly and donate a portion of the proceeds to the causes we support?” I posed that question to Steve Schueth, president of First Affirmative Financial Network, which manages portfolios for socially conscious investors. He asked if I could really stomach investing in a company such as ExxonMobil, a notorious climate change denier. “If the industry in which you’re investing is causing some of the problems you’re giving money away trying to solve,” he said, “that to me doesn’t make a lot of sense.”

Sense, of course, is highly subjective. There are more than 200 SRIs and each uses different criteria for determining what passes muster. Some screen for human rights issues, some screen for animal testing, and some don’t screen at all, but focus investment in geographic areas that have historically suffered from disinvestment. And since most corporations are a mixed bag, the same company can be kosher for one fund and treyf for another.

Some funds also sponsor shareholder resolutions, meet with executives to discuss social and environmental issues, and encourage shareholder activism. (For example, I recently got an email from the money managers at Domini Social Investments urging me to help defeat a bill that would “provide a windfall to major corporations” by limiting their exposure to asbestos litigation.) Trying to get corporations to act more responsibly is less futile than you’d expect. Along with stringent EU environmental standards, pressure from NGOs, and a crop of younger, more forward-thinking executives, the growth of SRI investing has inspired companies like Hewlett-Packard, Ford, and even McDonald’s to make real changes in the way they do business.

It’s also possible to feel good about investing on the dark side, in the hope of creating change from within. That’s the theory behind the Investor Network on Climate Risk, which uses the clout of institutional investors like state pension funds to nudge corporations into thinking proactively about global warming. Mindy Lubber, the director of INCR, argues that if a company isn’t thinking about how climate change will affect the way it does business, it’s not maximizing shareholder value. There’s $2.7 trillion invested through INCR, and that amounts to a fair amount of clout. Last year, six major corporations—among them Apache, Chevron, and Unocal—responded to shareholder resolutions by agreeing to measure their climate change impacts and present plans for mitigation.

I asked Lubber about ExxonMobil, Schueth’s example of an investment untouchable, and she had a somewhat different take. Divesting from Exxon might feel good, she says, but it isn’t going to change anything. What will change ExxonMobil is shareholder advocacy. Last year, 28 percent of its shareholders voted for a resolution demanding an analysis of the financial implications of global warming. “That,” Lubber says, “is a strong message.”

Having spoken to both Lubber and Schueth, I felt a bit better about my schizophrenic approach to investing. It seems that you can be socially responsible in a variety of ways. If screening is important to you, spend some time comparing criteria and performance at www.socialinvest.org. But you don’t have to invest in an SRI fund to be socially responsible—you just have to be a bit more proactive. If you own individual stocks, vote your proxies—www.ceres.org lists resolutions with social or environmental significance. If not, write to your fund managers demanding that they support such resolutions. Not a single one of the nation’s hundred top mutual funds supported any climate change proxy measure last year, and 28 of 31 investment management companies have policies requiring them to oppose or abstain on all environmental resolutions.

And finally, if you make out like a bandit playing the market, make sure to write a big fat check to the nonprofits that work to make the world a better place. There’s nothing wrong with making a little money on your investments, as long as you spread it around.