Good bye and good riddance to Julie MacDonald of the Fish and Wildlife Service. She was forced to resign because documents she leaked to industry lobbyists surfaced later in lawsuits against the federal government. Quite embarrassing, you can imagine.

But there were a ton of even better reasons for her departure. For example, “she demanded that the determined nesting range of the Southwest Willow Flycatcher be shrunk from a 2.1 mile radius to 1.8 miles, so that it would not cross into the state of California, where her husband’s family owned a ranch.”

As a henchman for the Bush Administration’s ungreening of America, MacDonald’s work is behind the seeming-miraculous comeback of so many species delisted as endangered in the past few months. To name a few in different states, grizzlies, gray wolves, crocodiles, flying squirrels, and manatees.

It’s not that they suddenly bounced back to normal populations. It’s that the feds, as Jen blogged, changed the definition of “endangered.”

Unfortunately, take out one fool, and there’s another standing by to replace her. It appears that her successor, Todd Willens, earned his creds spearheading former California Rep. Richard Pombo’s anti-endangered species agenda. 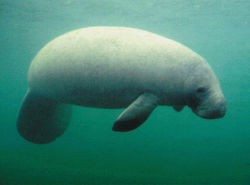 You’re on you’re own, manatee.