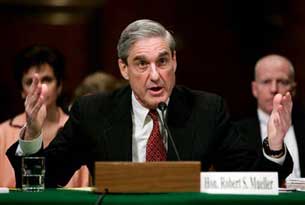 At a House hearing Thursday, Federal Bureau of Investigation Director Robert Mueller provided information that added to a growing body of evidence that Attorney General Alberto Gonzales may have perjured himself before the Senate Judiciary Committee.

Mueller appeared before the House Judiciary Committee to answer questions about the FBI’s role in a number of controversial issues, including its use of National Security Letters. During questioning by committee Democrats, Mueller provided revealing testimony about the National Security Agency’s Terrorist Surveillance Program, which is at the center of the renewed scrutiny of Gonzales’ recent congressional testimony.

The disclosures began about an hour into the hearing, when Rep. Mel Watt (D-NC) asked Mueller about his reported discomfort with the NSA’s domestic eavesdropping program. “Can you confirm that you had some serious reservations about the warrantless wiretapping program?” he asked. Mueller replied tersely, “Yes.”

Two days earlier, Alberto Gonzales had repeatedly insisted to the Senate Judiciary Committee that there had been no conflict within the Justice Department about the NSA program and that all disagreements had been over another, unidentified intelligence program. At one point, Gonzales expressed surprise that Sen. Russ Feingold (D-WI), who also sits on the Senate Intelligence Committee and receives briefings about programs such as the TSP, would call his account into question.

Mueller was not present at the now-famous March 10, 2004 hospital room meeting between then-Bush legal aide Gonzales, Chief of Staff Andrew Card, acting Attorney General James B. Comey, and then-Attorney General John Ashcroft, who was recovering from surgery at the time. But, according to Mueller’s testimony, he “arrived at the hospital after Mr. Gonzales and Mr. Card had left” and spoke briefly with the ailing Ashcroft about the his late-night dispute with the White House aides.

Rep. Shiela Jackson-Lee (D-TX) asked Mueller, “Did you have an understanding that the conversation [between Ashcroft, Gonzales, and Card] was on TSP?”

“I had an understanding that the discussion was on the NSA program, yes,” he replied, later adding that the program in question was “a national NSA program that has been much discussed.”

The revelations continued as Democrats were recognized by Chairman John Conyers (D-MI) to question Mueller. In an exchange with Rep. Steven Cohen (D-TN) about the bedside confrontation, Mueller said that due to conversations with Comey at the time, “I had understood the Department of Justice had some concerns about an NSA program.” Since the FBI uses information provided by the NSA, he explained, “My concern was to assure that whatever activity we undertook as a result of the info we received was done appropriately and legally. At some point in time [Comey] expressed some concern about the legality of it.”

“It was out of the ordinary,” Mueller replied.

“What was out of the ordinary Mr. Mueller?” Davis asked.

“Being asked to go to the hospital and be present at that time.”

When Davis asked if there were any reasons why he might mot submit his notes from the conversation with Ashcroft to the committee, Mueller answered, “Deliberative privilege.” Davis said that he “would certainly ask this committee and our colleagues in the Senate to make a formal inquiry to obtain those notes.”

Shortly after the hearing, Rep. Conyers officially requested that Mueller delivered his notes to the committee by August 1.

Mueller spent much of his time before the committee testifying about other longstanding controversies, including the FBI’s use of National Security Letters, administrative subpoenas that contain a gag order that forbids the recipient from divulging their existence. The agency has been criticized recently for its excessive use of these subpoenas without probable cause.

In both cases, Mueller defended the FBI in general terms, though he admitted instances of wrongdoing. He also agreed to meet with members of the committee individually to discuss these issues further. Mueller’s appearance before the House Judiciary Committee, which has oversight of the FBI, marked his first appearance before the committee in his more than six years as the head of the agency.