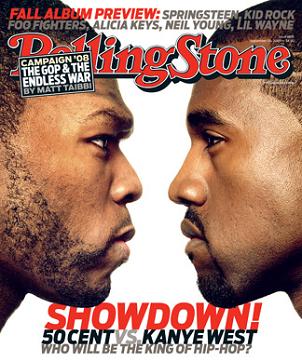 It’s being called the “hip-hop story of the year”: both Kanye West and 50 Cent have albums coming out tomorrow, and which one of them ends up on the top spot will determine, I dunno, the future of mankind or something. The whole thing is starting to seem like a little bit of a setup, especially since the two rappers were willing to put aside their differences to pose for the cover of Rolling Stone. That photo kind of makes me want to see them make out, just a little, like the sweatier Hall & Oates cover Idolator pointed out as an apparent inspiration. Anyway, Fiddy is annoying as a personality but great as a rapper, of course, and as Sarah Silverman said in one of the few barely-funny lines in her opening monologue last night, it’s “so cute he’s still alive.” But obviously, you’ve got to root for Kanye, the underdog: Daft Punk! Takashi Murakami! Three weeks ago, I would have said there was no chance Kanye would take the #1 spot, but with “Stronger” staying strong at iTunes, and the publicity from his MTV performances and antics, perhaps there’s been a shift in the zeitgeist.

It’s all reminiscent of The Battle of Britpop, although nowhere near as culturally relevant: back in 1995, arch-rivals Oasis and Blur released singles on the same day, with Blur lead singer Damon Albarn moving the release date of “Country House” up a week to coincide with the release of Oasis’ “Roll With It.” Back then, Oasis were the Northern working class heroes to Blur’s Southern art-school experimenters, and it seemed like the entirety of England (and Anglophiles everywhere) lined up on either side. Blur won the battle easily (outselling Oasis 274,000 to 216,000), but in retrospect, it sure seems like Oasis won the war: the next month, their album (What’s the Story) Morning Glory went on to become the 3rd best selling UK album of all time, and the following year, the band played two history-making shows at Knebworth for over 250,000 people, while Blur petered out. Of course Damon Albarn is more succesful than ever with Gorillaz these days, so it all kind of works out.

If Kanye is Blur (artsy, pretentious) and 50 is Oasis (street-level, boastful), it’s possible the outcome might be similar: Kanye wins this battle, via a random alignment of his stars, but looking back, 50 Cent will still be seen as defining his generation of hip-hop. Alternately, a Kanye win might signal the downfall of violent, controversial, cash-obsessed party rap, and the return of the progressive hip-hop sound of the 80s and early 90s. Or maybe they’ll both get beaten by Animal Collective, who will ride the success of today’s 9.3-rated Pitchfork review to a nation-conquering #1 debut. Now if you’ll excuse me, I have to ride my unicorn to Narnia where Dennis Kucinich is president.