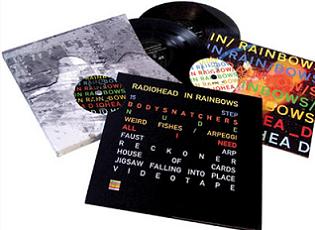 Well now I feel bad, since I’d been complaining about how cryptic they were being. Radiohead have announced they will be releasing their new album, In Rainbows, in ten days. Rumors had been swirling about the band’s upcoming material in recent days, with coded messages on their official site leading some to look for a March, 2008 release of a new album. Radiohead left EMI in 2005, so their next move had been the topic of great speculation. Thus this announcement has come as a major shock, with Pitchfork headlining their article, “NEW RADIOHEAD ALBUM AAAAAAAHHH!!!”

The unexpectedness of the announcement may be the least unusual thing about the release, which is breaking with many record industry conventions. First of all, the album will be available for the first two months after its release only as a digital download from the band’s website; second, and most interestingly, fans will be able to “name their own price” for the purchase. A disclaimer on the checkout screen reads, “It’s up to you.” Agh! Pressure!

The band will also sell In Rainbows on traditional CDs and double vinyl, just not immediately; the CDs will begin shipping in early December. Billboard has a tracklisting.

[update] For an interesting take on In Rainbows UK Telegraph blogger Shane Richmond has a piece called “How Radiohead Killed the Record Labels.” His point is mostly that while Radiohead isn’t doing anything that new here, it’s still a big deal because, well, Radiohead is a big deal:

None of the things Radiohead are doing with this is unique. All of them have been developed and used by other artists for quite some time. But this is Radiohead. When one of the world’s biggest bands does something like this, it will get noticed and it will start people thinking. …Record labels survived for years on the value they added to the process. They made it possible for bands to make records and get them into the stores and then used their marketing weight to get those records played on the radio and featured in magazines. In the process they made enormous profits by overcharging fans and underpaying artists. …[But] they no longer add any value to the process. In fact, they act as a barrier between fans and musicians. It’s time to move them out of the way and Radiohead have just showed us how.

Well! All praise be to Radiohead! The album’s popularity is assured, but the question remains on how all this will work out; the website has already crashed once due to overwhelming traffic. Any problems with delivering the mp3s (or the actual CDs) could be looked at as a warning for any band trying to imitate Radiohead’s move. We’ll see in ten days…

[update #2] As news emerges that no advance copies of In Rainbows will be sent to the press, British music weekly NME has taken it upon themselves to match up the album’s tracklisting with YouTubed live footage of the band, and they’ve found clips of almost every one of the songs. Whether they’re completely accurate, it’s hard to be sure, but if you can’t wait ten days for your Radiohead experience, check the videos out here.