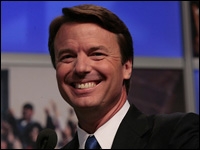 Most of the Democratic presidential contenders took a break from campaigning in Iowa and New Hampshire on Friday to gather outside of Washington D.C. and make their pitches to Democratic Party bigwigs.

Before the news broke that Hillary Clinton campaign workers had been taken hostage in Rochester, New Hampshire, Bill Richardson, John Edwards, and Barack Obama addressed the Democratic National Committee’s fall meeting in a hotel ballroom in Tysons Corner, Virginia. None of them altered their messages dramatically for the insider crowd, and John Edwards, who had all of the day’s best moments, broke out a new speech that even intensified his attacks on the Washington system that included many of the people in the audience.

At the start of his speech, Edwards declared, “There’s a wall around Washington and we need to take it down. The American people are on the outside. And on the other side, on the inside, are the powerful, the well-connected and the very wealthy.”

America’s health care woes, the economic insecurity of the middle class, even the war in Iraq—Edwards tied them all to this wall, the barrier that protects the status quo and conventional wisdom from being challenged. Seeking to distinguish himself from his rivals—he shares most policy positions with both Obama and Clinton, and shares with Obama a professed desire for reform in Washington—Edwards asserted that only he possesses the fighting spirit needed to tear down the wall. His critiques of Obama (too admiring of bipartisanship) and Clinton (too intimate with the powerful) were not that subtle:

This is going to be the fight of our lives. I know because I’ve spent my whole life fighting the powerful on behalf of hard-working people, and I can tell you this: they are not going to give up their power easily.

It was a new speech for Edwards. He has attacked the system as “corrupt” and “rigged” before, but the wall-around-Washington riff was a new construction. Unveiling this speech here was either gutsy or desperate, or maybe both: some in this audience had long been part of, and profited from, the insular Washington culture Edwards says he wants to smash. They were perhaps more accustomed to the “Two Americas” John Edwards who decried the gap between rich and poor. But now he was telling the insiders it’s the people versus them.

And Edwards won the crowd over. Admittedly, there were plenty of Edwards supporters and volunteers in the room, but the general reception to his populist cry was positive. Was he previewing the speech for crowds in Iowa (where recent polling shows the race in a statistical three-way tie)? If so, he has reason to stick with a hard-hitting script he can deliver with passion and apparent conviction.

As he usually does, Obama threw some abuse at special interests and lobbyists. Not too long ago, the fact that Obama and Edwards echoed the same reformist message appeared to neutralize the Edwards campaign—or at least prevent it from overtaking the Obama effort. But now Edwards is trying to make it clear that he and Obama are not clones. One wants to transcend partisan politics and heal America. The other says that healing America is for the naïve and a fight is what’s needed. Transcendence or combat—that’s one choice for those Iowan who do not want Hillary Clinton.