Before David Horowitz began warning America about the dangers of communism in the eighties, he spent years fervently celebrating communists during the sixties.

So it’s no surprise that before he began warning us all about the dangers of “Islamofascism,” he spent years fervently celebrating Islamofascists. Below is a picture of Horowitz from a 1986 Mother Jones profile. As you can see, his t-shirt reads “Support Afghan Freedom Fighters.” There’s also a sketch of a man holding an assault rifle who looks vaguely like Osama bin Laden.

Currently Horowitz runs the David Horowitz Freedom Center. Look for his angry denunciations of his current dupes and fellow travelers circa 2027. 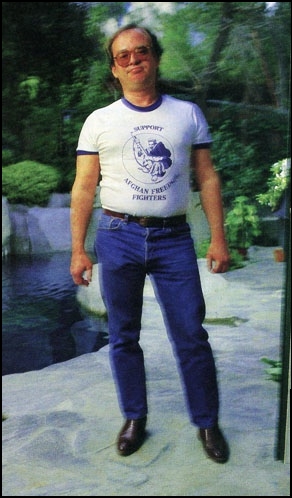 (Thanks to Dennis Perrin for remembering this.)