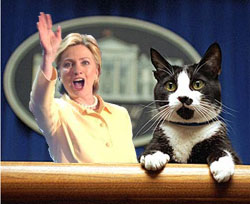 Hillary Clinton has what pollsters call high negatives, which essentially means that lots of people really don’t like her and never will. But her supporters have long argued that she is a formidable candidate despite these negatives because those numbers aren’t likely to go any higher. As the theory goes, Americans are already well acquainted with the Clintons’ dirty laundry—Whitewater, Monica, etc.—and as a result, any more mud slung at Hillary isn’t likely to stick. Unlike the less-seasoned presidential contenders, she’s been through the mill, and is still standing. But if last night’s Washington premier of Hillary: The Movie is any indication, this particular case for Clinton the candidate is wishful thinking.

Created by the conservative political group Citizens United, the anti-Hillary movie makes the Democratic primary season look like a polite college-debate tournament. It hurls all the down-and-dirty opposition research her opponents have thus far declined to touch. Moreover, it doesn’t simply recycle the old anti-Hillary stuff; it raises a new slew of charges to spin the New York senator as a cross between Machiavelli and Lady Macbeth. The movie offers a preview of what the general election could look like should Clinton become the Democratic nominee. Despite far too much ranting by Ann Coulter and a few silly moments, the movie hits hard at Clinton’s weak spots and lands some solid punches that can’t be dismissed just because they come from the right-wing’s usual suspects.

Hillary dips briefly into some of the old Clinton scandals, including Bill’s well-documented skirt chasing. An alleged victim of the former president’s sexual advances, Kathleen Willey, appears in the film a decade after her moment on the national stage. Willey shows extensive signs of plastic surgery and paranoia and reprises some of the material from her recent book, Target: Caught in the Crosshairs of Bill and Hillary Clinton. In a taut-lipped interview, she suggests that after her name surfaced in the Paula Jones sexual harassment lawsuit against Bill Clinton, the Clintons arranged to have her kitty assassinated. Willey, who attended last night’s screening, says she got an anonymous phone call taunting her about her missing cat and later discovered a cat skull on her porch. She says a private investigator tipped her off that the White House was having her investigated. (The investigator, a pockmarked Jared Stern, also appears in the film like some sort of Deep Throat, interviewed in a parking garage.)

To great effect, the film also digs into the tale of Billy Dale, the former longtime head of the White House travel office who was allegedly sacked on Hillary’s orders so she could staff the office with cronies boasting Hollywood connections. According to the movie spin, the White House falsely accused Dale of embezzling thousands of dollars from the travel office as justification for the firing. He was prosecuted and acquitted by a jury in two hours. His story of how the Clintons ruined his life brought some audience members to tears. Of course unsaid in the film is that there was substantial evidence in his trial that Dale had mismanaged the travel office, that he was getting freebies—like sporting-event tickets—from contractors, and that he had diverted $54,000 in refund checks into his own bank account and lost track of $14,000 in petty cash, all solid reasons to fire the guy.

But the movie’s producers smartly skip over most of the ancient history from the Clinton administration and stick to fresher material, much of which will be unfamiliar to the average viewer (or voter). The fundraising scandals alone provide a mountain of fodder. And Hillary makes great use of the video footage from the 2000 “Hollywood Farewell Gala Salute to William Jefferson Clinton.” The star-studded event was organized and paid for by Peter F. Paul, a repeat felon and con artist who had cozied up to the Clintons in the waning days of the administration. Aiding him was Aaron Tonken, another con man who was later convicted of defrauding charities, who helpfully provides an interview for the film from prison.

Paul, who is interviewed extensively in the movie, paid $1.2 million to put on the gala, which raised money for Hillary Clinton’s Senate race. Her Senate campaign, however, reported to the Federal Election Commission that the event only cost $523,000. (In-kind donations such as hosting a party count toward candidate spending limits.) The FEC eventually fined Clinton’s campaign $35,000 for underreporting the cost of the party. Hillary Clinton’s finance director was tried and acquitted for his role in reporting the event cost.

After the Washington Post reported on Paul’s criminal history, which included drug charges and all sorts of financial shenanigans (even defrauding Cuba, if you can imagine the level of criminal ingenuity that would entail), Hillary Clinton distanced herself from him. But Hillary showcases lots of footage and chummy photos of the former first lady with Paul, even a video of a conference call she made to him. All this suggests a close relationship that’s going to be tough to avoid addressing if she ends up facing off with a Republican next fall.

The criminal past that makes Paul a problem for Clinton also makes him a problem for the filmmakers. To address this issue, Citizens United hired a professional polygrapher to administer a lie-detector test to Paul on film, which of course he passes. It’s a laughable scene, and it’s tempting to dismiss the guy’s story, except that a lot of it is true. The Clintons have still never explained how they hooked up with Paul. As Paul points out in the film, his house was prepared for presidential visits, and he also visited the White House on several occasions, so it’s hard to believe that the Clintons didn’t know he was a crook long before the gala. You don’t need to be James Carville to see how the episode may play out in campaign ads next summer.

Right-wingers generally aren’t famous for their sense of humor, but Hillary manages to land some zingers. The movie deftly uses clips of Sandy Berger, the former Clinton national security advisor who stole classified documents from the National Archives in 2003. The film claims he did it for the Clintons. There’s Berger giving a statement to the press about making a “mistake,” followed by Senator Mitch McConnell on the Senate floor, sporting a mischievous smile, commenting on the whole affair: “Were I to engage in a little literary flair, I might say it seems Sandy walked out of the National Archives with some PDBs in his BVDs and some classified docs in his socks.”

The film, however, goes overboard on conspiracy theories about how the Clintons have tried to suppress information that Bill Clinton failed to kill Osama bin Laden when he had the chance—and the documents Berger destroyed, Hillary suggests, were part of that effort. But the fact that Berger is now advising Hillary’s presidential campaign is a legitimate issue that can’t be brushed off as right-wing propaganda.

And finally, you can already see the making of the campaign ads in the film’s segment on Bill Clinton’s pardoning of 16 members of the Puerto Rican terrorist group Fuerzas Armadas de Liberación Nacional, which the film lays at the feet of Hillary. The film tries to jerk some tears by interviewing Joseph Connor, whose father was killed in a FALN bombing of the Fraunces Tavern in New York City in 1975 when Joseph was nine years old. Hillary strings together grainy home-movie footage of Connor and his father with narration about the bombing. Connor returns to the tavern with a retired FBI agent who investigated the crime. There’s lots of lip biting, and overkill is the operative word, especially given that none of the people Clinton pardoned were personally responsible for the tavern bombing. Nonetheless, it’s great agitprop, as it strikes at the heart of Hillary’s national-security bona fides.

At 90 minutes, the film is way too long, in part to make room for all the nasty commentary from the conservative chattering class. They’re all in there: Bay Buchanan, Tony Blankley, an utterly vicious Dick Morris, Robert Novak, Michael Barone, Larry Kudlow, as well as such luminaries as Indiana Congressman Dan Burton, for whom Citizens United president David Bossie worked in the 1990s, Newt Gingrich, and Buzz Patterson, a retired lt. colonel who carried the “nuclear football” as the senior military aide to Clinton but who has since churned out a host of books attacking his former boss for wrecking the military.

The odd man out in all this is former New York Times reporter Jeff Gerth. In contrast to everyone else in the film, Gerth’s comments are measured and mostly refer to the research from the book he recently coauthored on Hillary, Her Way: The Hopes and Ambitions of Hillary Rodham Clinton. His biggest knocks on Clinton are that not one of the 200 speeches he reviewed addressed counterterrorism and that she is constantly wrestling with her own identity. But Gerth’s appearance in the film will bolster suspicions among those in the Clinton camp that the reporter was in cahoots with the vast right-wing conspiracy to bring down Bill with his reporting on Whitewater.

Gerth hadn’t returned a call for comment at press time, but Citizens United’s Bossie told me last night that Gerth sat for an interview because he knew Bossie from his days on the Senate Whitewater committee and believed he was a straight shooter who wouldn’t take Gerth’s comments out of context.

Despite all its significant flaws and misrepresentations, Hillary is a useful reminder that Clinton carries a lot of baggage. It should give voters pause if only because the film lays waste to any notion that the vast right-wing conspiracy slithered under a rock. The Clinton-haters are alive and well, and in fighting form.

Whether anyone outside the Free Republic universe will actually see the film is another matter. While it will be screened in theaters across the country starting this week, federal election law has prevented Citizens United from advertising the film on the grounds that it is a campaign ad. Bossie has sued the FEC, arguing that it should be protected commercial speech and thus exempt from the campaign laws, which would require the group to disclose its donors, something it clearly doesn’t want to do. A panel of federal judges recently heard arguments in the case, but no decision has yet been made. For now, Bossie will have to rely on Sean Hannity and word of mouth for promotion, which in a way is too bad. Democratic primary voters ought to watch it, just to make sure that they fully understand that a vote for Hillary is also a vote to bring back the people behind this film. It’s clear that the American public won’t be able to have one without the other.