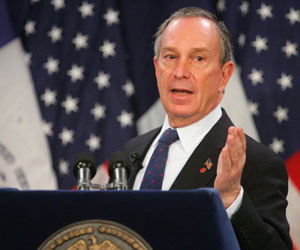 Some Democrats are worried that Michael Bloomberg, the liberal Democrat-turned-Republican mayor of New York City, might run for President as an independent. After all, Democrats have always tried to convince (or force) left-leaning third-party candidates not to run. The argument is that people like Ralph Nader and Michael Bloomberg split the Left-wing vote, damage Democrats’ electoral prospects, and allow Right-wingers like George W. Bush to waltz into the White House. There might be something to that.

But third-party types, for their part, tend to argue that the country has a need for more diversity in politics, and that one day the public will come around to their line of thinking. But reasonable people know that’s not particularly likely. Why? Because the nature of our voting system create an environment that favors two stable parties:

From FactCheck.org (emphasis mine):

The winner-take-all system in the U.S. favors two stable parties.
The U.S. political system is based on what political scientists call a single-member district plurality (SMDP). That’s a fancy way of saying that the U.S. elects representatives from particular districts, with the person who gets the most votes in a district (also called a plurality) winning the seat. Each district is winner-take-all, and votes in one district have no effect on other districts. Presidential elections, though nationwide contests, are likewise really state-by-state races, thanks to the Electoral College, in which every state except Maine and Nebraska awards all of its electoral votes to whichever candidate wins a plurality of the state’s votes.

So basically, the United States’ electoral system doesn’t support a viable third party, because a third party that was actually successful would mean the demise of one of the two existing parties. Why?

The reasons here are mainly statistical. Third parties may have statistically significant support (maybe 15 percent of voters in every district supports a third party). But in an SMDP system, the third party may well not win any seats. So those voters will likely join with another party and look for a compromise candidate that could represent them. Similarly, suppose that a district has 200,000 conservative voters and 110,000 liberal voters. One would expect a conservative candidate to be elected. But if two conservative parties each run a candidate, then a liberal candidate may well be elected – unless the conservative parties unite behind a single candidate.

So it turns out that voting for a third party just because you think there should be more than two parties is economically and electorally irrational. Because unless we change the first-past-the-post system, it’s unlikely that the U.S. is ever going to have more than two major parties. My colleague Jonathan Stein points out that Michael Bloomberg, who is no dummy, probably knows all this. If he doesn’t think he can actually win electoral votes (i.e., win states and force either the Democrats or the Republicans into third place nationally), he probably won’t run. And who knows. If you have Mike Bloomberg’s kind of money, it’s quite possible that even basic laws of political science will bend to your will. Good luck with that, Mr. Mayor.

(If you want to learn more—way more—about our voting system and potential alternatives, check out Michael Mechanic’s great interview with the author William Poundstone.)