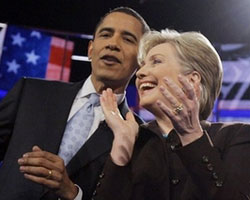 In the early states such as Iowa and New Hampshire, the presidential candidates pushed hard for victories that would yield few delegates but garner them momentum and media buzz, and separate them from the rest of the pack. But now that Barack Obama and Hillary Clinton have reached February 5’s almost-nationwide primary, they’ve adopted a new strategy: pushing for “close enough.”

It’s a product of the all-powerful but little-understood role of delegates in deciding primary elections. In this historic and unique election, the technical details of how delegates are awarded may have more to do with choosing a Democratic nominee than all the media buys, GOTV operations, and newspaper endorsements put together.

Under Democratic Party rules, states divide their delegates proportionally according to vote totals at the state and district level. The rules for awarding delegates are very complex and vary from state to state (which will make figuring out the true results of Super Duper Tuesday a challenging task for the media). But in most places, the system works like this: say four delegates are up for grabs in a congressional district; if one candidate wins 30,000 votes in that district and the other wins 20,000, both will take home two delegates.

This creates a focus on districts that have an odd number of delegates. Districts which, through the quirks of state party rules, have five delegates will give three to the winner and two to the loser in even a 51/49 split of the popular vote.

This also creates a powerful incentive for the candidates to do what they can to come close even in states and districts they expect to lose. Consequently, Obama is running ads in New York and campaigning in the tri-state area, Hillary Clinton’s backyard, and Bill Clinton is campaigning in Illinois, where Obama should win big. As a general rule of thumb, the second-place candidate only has to draw a meager 30-40 percent of the vote in a state to be guaranteed roughly half the state’s delegates.

This means that if there is no blowout on February 5, and no one is currently expecting one, all of these state contests could produce a close delegate count that propels the race into late February and March—if not beyond. In fact, it is possible that Hillary Clinton could win the popular vote by small margins across the country (and have what looks like a sweep on Wolf Blitzer’s giant electronic map) and yet be tied in or behind in the delegate count.

“The reality is we really are in a delegate-by-delegate battle,” Guy Cecil, Clinton’s national political and field director, has said. “At the end of the day, this is a delegate contest,” says David Plouffe, Obama’s campaign manager.

For Obama, who is trailing in the polls in most February 5 states, this means he does not have to come out the winner. He need only survive. After February 5, the primary schedule returns to normal—that is, it stretches out—and candidates will have the opportunity to focus on individual states and work voters thoroughly before they go to the polls.

This is a format that benefits Obama. The early states all showed the same pattern: Obama trailed Clinton in the polls for months, presumably due to “low-information voters” identifying their preference to pollsters based primarily on name recognition and loyalty to the Clinton brand. But when Obama had weeks to campaign in a state (sometimes just days), he closed the gap rather quickly, either winning the state or finishing a close second. Moreover, Obama has been tallying endorsements and building on-the-ground machines recently that match or surpass Clinton’s impressive operation.

After February 5, Obama will have four days to campaign in Louisiana and Nebraska. (Delegate-poor Maine, voting a day later, will likely receive only token interest.) Then he’ll have three days to devote to the Potomac Primary of Maryland, Virginia, and the District of Columbia. Next, he’ll have five days to campaign in Washington and Wisconsin (Hawaii, voting the same day, is where Obama grew up and likely won’t require much of his face time). After that, if Obama still has a fighting chance at the nomination, he has two weeks before the bonanza primaries on March 4 in Ohio and Texas (Rhode Island and Vermont also vote that day). For the rest of March, only Wyoming and Mississippi hold primaries, meaning the April 22 Pennsylvania primary could be decisive.

The schedule might well help Obama, but it probably helps the Republican nominee more than anyone. That’s because the Republican Party has winner-take-all rules in many large February 5 states. So if John McCain beats Mitt Romney by 1 percent in New York state (though he is expected to win by much more than that there), he gets all of New York’s 101 delegates. In all likelihood, the Republican race will be decided by February 6 or shortly thereafter. The Republican nominee will then have weeks, if not months, to hone his message, raise money, and rest up before the Democratic nominee emerges.

If the Democrats reach that point, they’ll be entering uncharted territory. John Edwards will be under intense pressure to instruct his small handful of delegates to support a candidate, and the delegates will be under intense pressure from the campaign that doesn’t get Edwards’ endorsement to disregard the former Senator’s instructions (which they are allowed to do). Clinton will likely make a major push for seating the delegates she won in Michigan, where her only competition was “uncommitted,” and in Florida, where campaigning was banned.

And delegates pledged for Obama and Clinton will come under pressure to defect. When an individual seeks to become a delegate, he or she is usually a very active member of a candidate’s campaign at the state or local level. The candidates essentially hand-pick their delegates. But once the delegates get to the convention, they are only required, under Democratic Party rules, to “in good conscience reflect the sentiments of those who elected them.” That means they can cast a ballot for any candidate they choose. In this year’s Democratic convention, they may actually have more than one option.