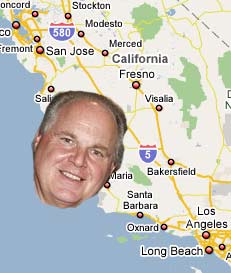 Other parts of the country may have rough roads, other far-flung cultures may have haunted paths of doom through dark forests, but we in California have the I-5, a straight-arrow 300-mile death-bahn connecting NorCal and SoCal. It’s a harrowing journey through the dust-and-smog-filled wasteland of our dreaded Central Valley, chased by monstrous semis and LA douchebags on their cell phones doing 95. When one’s driving it, like I did today, and one gets bored listening to stuff on the iPod-radio system, and turns with great trepidation to the radio, there are few options: lots of Spanish, lots of Jesus, and Rush Limbaugh. I settled on the latter, and it was an interesting day to tune in.

His first hour was spent describing and defending his sneaky plan to have Republicans in Texas vote for Hillary, in a rabble-rousing attempt to keep the selection process going in the “Democrat” party (as he so charmingly calls it). Many disarmingly normal-sounding listeners called in to claim that they had already done so, and to express their gut-wrenching horror at actually pulling the lever for Hillary, even if it was done strategically. In Rush’s defense, Daily Kos advocated the same thing with Romney in Michigan, and I have to be honest: while the show’s ideology was obviously pretty rancid, the facts were pretty well-covered. A segment about the mainstream media’s overplaying of the “Limbaugh hates McCain” situation was also kind of enlightening (and disturbing for any Democrat who anticipates conservatives staying home in November), since Rush took responsibility for his previous criticism of McCain but pointed out that since he became the presumptive nominee, he’s backed off.

Things eventually turned ridiculous, though. A caller, discussing how Clinton and Obama are both terrifying or whatever, made the comment that “my 12-year-old says that Obama looks like Curious George!” As my jaw hit the steering wheel, Rush chuckled and they moved on to the next topic. Upon coming back from a commercial break, however, Rush made an announcement: he apologizes, he didn’t know who Curious George was, let alone the fact that he is a monkey, and to drive home the point proceeded to spend about 30 minutes denying any knowledge of pop culture in general, professing ignorance, in turn, of Snoopy, The Simpsons, and “cartoon monkeys” of any sort. He apologized multiple times to Obama and, inexplicably, to McCain, but it was all just so sad that I started to feel kind of ill, and I finally put on “104.1 It Just Rocks” until I neared the Bay Area and a staticky public radio signal, although they were broadcasting “Talk of the Nation,” which really isn’t that much better. But my trip through the valley of the shadow of death did at least confirm that while Limbaugh may have brief moments of internal logical consistency, eventually he’ll indict himself with hypocrisy so pathetic you’re willing to listen to Nickelback instead.

Photos: via Google Maps and used via a creative commons license from Flickr user Knuckledragger.