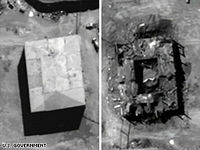 Late last week, two senior US intelligence officials and a senior administration official provided background briefings to Congressional committees and the media on what they said was the evidence of North Korean involvement in a covert Syrian nuclear reactor. The facility was destroyed by Israeli air strikes last September, in an operation dubbed “Operation Orchard” that was subject to an Israeli news blackout.

“What we’re going to discuss is a nuclear reactor,” one senior US intelligence official told (.pdf) the media. “It was constructed by the Syrians in the eastern desert of Syria along the Euphrates River on the east side. The Syrians constructed this reactor for the production of plutonium with the assistance of the North Koreans.”

“Our evidence goes back an extended period of time,” he continued. “In the spring of last year, we were able to obtain some additional information that made it conclusive. And so, we engaged in this policy process of now that we have the evidence, what do we do about it? The evidence concluded a nuclear reactor, as I mentioned, constructed by the Syrians, started probably in 2001, completed in the summer of 2007. And it was nearing operational capability.”

(You can read the transcript of the intelligence officials’ full remarks here (.pdf), and see the video the officials presented here.)

The briefing had been much anticipated. Since the Israeli air strikes last September, hawks opposed to US negotiations with North Korea over its nuclear program had argued that if Israel or the US revealed what Israel had hit in Syria, North Korea would be exposed as proliferating nuclear technology abroad and in violation of the spirit of the negotiations.

Calling the State Department’s diplomatic efforts with Pyongyang “feckless, ” noted hawk, former US ambassador to the UN John Bolton, wrote in a Wall Street Journal oped August 31, 2007 – intriguingly precisely one week before the Israeli Air Force operation: “We know that both Iran and Syria have long cooperated with North Korea on ballistic missile programs, and the prospect of cooperation on nuclear matters is not far-fetched. Whether and to what extent Iran, Syria or others might be ‘safe havens’ for North Korea’s nuclear weapons development, or may have already participated with or benefited from it, must be made clear.”

But though skeptics of US-North Korea diplomacy such as Bolton had long pushed for the information on what had been struck in Syria to be disclosed, when the briefing came late last week, some media reports suggested the timing of the briefing was intended not to scuttle the US-North Korea deal, but rather, to push Pyongyang to finally come clean on its alleged proliferation activities as a way to accelerate a peace settlement. And what’s more, the briefing came as Israel and Syria had both spent weeks signaling their interest in pursuing possible engagement and their anxiety to avoid an escalation of hostilities.

“Based on my own ‘uninformed’ perspective, the big question is not whether the Syrians were building a nuclear reactor, but whether it was actually close to becoming operational (which raises questions about the timing of the strike) and the almost total absence of any evidence of what kind of plans the Syrians may have had for any plutonium that might have been produced at the plant if and when it went into operation,” said former US National Security Council official Gary Sick. “Although some will fix on the anomalies to cast doubt on the very existence of such a project, the real debate in policy circles (including the Congress) is likely to focus on whether it was really as far along as claimed and whether the same thing could have been accomplished by publicizing the photographic evidence and insisting that the IAEA be permitted to inspect the site.”

“The other big question is why the Syrians decided to do this,” Sick added. “It is easy to explain North Korean motives — money, money, money. But did the Syrians intend to follow their covert reactor project with a covert plutonium reprocessing facility and then a covert bomb design and testing program? And they didn’t expect to get caught?”

In the wake of the US briefing on the Syria strike, Israeli defense minister Ehud Barak has postponed a trip to Washington, Israeli media report. “The postponement is aimed at avoiding the impression that his meetings were in any way connected to the U.S. decision to disclosure information on the Syrian facility,” Ha’aretz reported, noting that Barak had been slated to meet with his counterpart Defense Secretary Robert Gates as well as Vice President Dick Cheney.

(Released US government “before” and “after” satellite photos of facility struck in Syria linked from Wikipedia).