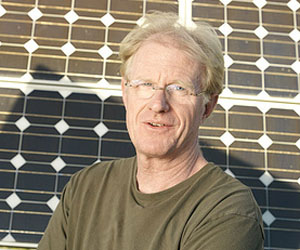 Photo used under a Creative Commons license by flickr user <a href="http://www.flickr.com/photos/pgh-hamptons/">Project Greenhouse-Hamptons</a>

Ed Begley Jr.: I think wind has tremendous potential as far as bang for the buck. I’m still a big fan of solar. I don’t mean to relegate solar to second position. But what’s happening in wind is so exciting. This company, Packwind, has a vertical-axis wind turbine that has never harmed a bird, bat, anything, and that is a concern of many like-minded people. So now there is an alternative. Keep in mind, coal plants claim plenty of birds too. Sadly, hydro claims the lives of many fish. There is a price for everything. Solar does the best as far as very minimal wildlife damage.

MJ: Why wind in front of solar?

EB: Because of the cost. Solar is still so expensive for so many people. You can get a 2,000 kilowatt Packwind turbine, vertical axis—if you have a piece of property big enough to warrant it, let’s say an acre or something—for just $4,000 dollars. Two dollars a watt? You can’t get solar for $2 a watt. You just can’t.

MJ: Will that work everywhere? Are you in favor of wind farms that transport energy over long distances, or do you think power generation should be more local?

EB: Better for certain regions of the country. It has to be in the right place. You don’t want to put it in the Pacific Flyway.

MJ: What about places that aren’t very windy?

EB: Right. That’s as bad as hurting birds. To have an ineffective turbine that’s working 30 days out of the year would be crazy. You’ve got to site it in the right place.

MJ: Beyond wind and solar and the larger efforts, do you see anything bubbling up that might make for a good energy source down the line?

EB: There are other energy-efficiency methods that have tremendous promise. One of them is “green switch.”

MJ: What’s the most overhyped?

EB: I don’t know if it’s overhyped, but there is one that has a little bit of blowback on it, because of some of the issues. I’m talking about ethanol. Let me be crystal clear. I’m in favor of ethanol and biofuels. But rather than making it out of the corn that can be used to feed people, I’d rather see it made out of the corn stalks and the switchgrass. I’m totally down with biofuels. I want it to happen. I’m a big proponent. But I want it to be made out of the right stuff. I don’t want the price of tortillas going through the roof as it did recently. I know people in developing countries are suffering because of it. And I know there is a big demand for corn ethanol. So, I’m just trying to connect the dots here, and I think we need to be making it out of ag waste, not raw corn.

MJ: If you had $1 million, where would you invest it?

EB: I would put it in solar. That’s my favorite form of energy. I brought up wind because it’s gotten so cheap. I’d still put it in solar because I’d like a million dollars to go out there right now into solar to promote the industry. When it hits a certain point, when enough people go into it, it’s going to go the way of the DVD player or the video deck or the personal computer. “Now wait a minute, now that we’re doing so many of these, they are going to be a lot cheaper.” So that’s why I’d put it there.

MJ: What if you were only looking for a cold-eyed return?

EB: To just get my money back, cash back quickly, I’d put it into wind.

MJ: What will it take for renewable energy to really go mainstream?

EB: I think the tipping point is just a critical mass of people who finally accept it. People have it in their mind that it’s too expensive, and so it is. Here is what I would like to have happen: that the people who can afford it would buy solar. Everybody who can afford it—doctors, lawyers, professionals, actors, athletes—people who have the money would put some amount of solar on their house. The way people did with personal computers. Enough people say, “Hey, I want to have a personal computer” in the ’80s and suddenly they got a lot cheaper and by the ’90s, you know, it just went boom. And now they are really cheap. I bought a personal computer in ’87 with a hard drive, not just floppies, a 25 MB hard drive. You know how small that is. That’s like nothing. It was $4,700 dollars for all the stuff that came with it. And at some point just a few years down the line, it was a fraction of that.

MJ: What does it take to make those people who can afford it do it? Is it gas reaching $6 a gallon? Is it housing-fuel costs going through the roof? Greenhouse gas?

EB: It’s all those things. It’s people wanting to do something about global climate change. People fed up with the high price of gas. People tired of breathing dirty air. In Houston, Los Angeles, Bakersfield, and other cities. It’s just going to be people going to see Al Gore’s movie. It’s going to be a critical mass of people experiencing something. And I think it’s going to happen. I hope it is.

EB: I’m hopeful, and I’ll tell you why. You look at the air in L.A. We have four times the amount of cars since 1970, yet we have half the ozone. We should all get a medal. It’s really impressive what we’ve done. It seems kind of bold to be optimistic at this point in history. But I am. I think we can do it. Take that hole in the ozone layer over Antarctica. We went, “Wow, it’s going to be 25 years before we really put a dent in that because of all the CFCs out there,” and look what happened. We got real aggressive after the Montreal protocol in ’87; we really got down to brass tacks. Something we started in the ’70s with banning CFCs from sprays, we got deeper into it in the ’80s. Now, from ’87 to date, the hole has not stayed the same size. It has not gotten bigger. It’s gotten smaller, substantially smaller. We can do this but we’ve got to get to work today.

EB: Getting out of my car. Just getting out of the car as much as possible. Walking. Public transportation. Bicycle. Keep in mind that my car is a pretty green car. It’s an electric car. It’s a fueled-on-solar electric car because of all the solar I have at my house. So, even though it’s a good car, I try to get out of that car as much as possible.

MJ: What is the biggest impediment to the development of new energy?

EB: It’s the status quo. People don’t want to change. It’s hard for people to change and it’s hard for businesses to change. If I was running an oil company, I would be resistant to change too. I mean, it’s a big upheaval for them. But the smart ones like BP, though they certainly have their problems with the refineries in Texas and the pipeline in Alaska, that not withstanding, they make a pretty good solar panel. They have tried to in many ways go BP, beyond petroleum. John Brown, who is no longer with the company, he got it. He was one of the first ones to admit that global climate change was real. And to realize he’s running an energy company. They can still sell people a cold beverage and a warm shower. They are just going to do it differently. What do they care if it’s a solar panel or a wind turbine? You are an energy company. Sell the power.

MJ: Is there legislation that needs to happen to force the issue? Could the new president do something?

EB: If there was some legislation, that would really promote things. That would assist consumers in a meaningful way at the federal level to do even more. Strong incentives to even begin to level the playing field with these heavy subsidies that coal and oil continue to get. Something that really was not like some Dickensian novel where solar and wind are [squeaky voice] “Please sir, I want some more.” [Booming voice] “You want some more?” You know, if there was something, a real meal presented to that part of the orphanage, I think it would be great. And that’s very possible.

MJ: Do away with subsidies for oil and coal?

EB: I think that would be a great idea.

MJ: Anything else specifically?

EB: Meaningful raise in the CAFE standards. A meaningful subsidy for people who want to buy an Energy Star appliance or a hybrid car or an electric car or a natural gas car or a biodiesel car. Meaningful subsidies at the federal level. And that is something that’s very possible with a new administration.

MJ: Who do we have the best chance with?

EB: Obama has been in the Senate for a while. But he’s part of a new movement so I would guess we might have our best chance with him. But even John McCain supported a big rise in the CAFE standards for cars. You find your friends wherever you find them.

MJ: When will we see the last gasoline-powered Hummer?

MJ: What is your energy guilty pleasure?

EB: I’ll be honest with you. It’s confession time. When I was single, I kept it 68 in the winter and 78 in the summer. I haven’t been single for many years. I’m 58. My wife likes it warmer than that in the winter and cooler than that in the summer. You asked my guilty pleasure. I pretend that I’m angry about it. I ain’t that angry. I fight her on it, but I’m happy she wins. I don’t fight that hard anymore.