If you were out and about this weekend and noticed a lower ratio of geeks hanging around than usual, there were two reasons why: the season premier of Battlestar Galactica on Sci-Fi Friday, and a hyped episode of Torchwood on BBC America Saturday, its third-to-the-last before the season finale. So, how were they, and was there any significant political/religious allegory or sexual identity boundary breaking, respectively?

After the jump: flying away from Earth makes my head hurt, and seeing it burned to a crisp makes me holler.

Much of Galactica‘s appeal has been its eyebrow-raising political symbolism; they famously seemed to identify with Iraqi insurgents in the third season, for instance. So for those of us who found that aspect of the show more intriguing than the mystical mumbo-jumbo, this episode was a bit of a disappointment. The major development—the unexpected return of Starbuck (after clearly dying last season) in a spotless ship and claiming a miraculous sighting of Earth—is way off in la la land; throw in President Roslin’s apparent headache premonition of a Cylon attack, moments before it happened, and Baltar’s coven of “one-god” lovelies, and you’ve got an episode full of The Magical and Unexplained. However, it’s worth remembering that the first series was apparently a thinly-veiled reimagining of the story of Mormonism (the Galactica home world of Kobol a reference to the Mormon Kolob), so there may be intriguing references to real-world religion here, something they make explicit with the Last Supper-referencing photo on the Sci-Fi home page (see above). Is Starbuck like a space-age Joseph Smith Jr., trying to bring her lost tribe to a promised land? The Cylon thing is also a little obtuse: four characters, who have apparently lived full lives among humans, turn out to be secret Cylons, despite the fact that, well, they hate Cylons, and now they’re worried they might be “switched on” at any minute to wreak havoc amongst their friends—what’s that a metaphor for? “All will be revealed,” say the previews, and I hope they’re serious; any Riff readers out there with theories, comments please! 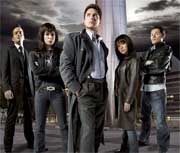 Torchwood, on the other hand, offered emotion instead of big themes, and finally seemed to come together after what has been an inconsistent and dissatisfying season. I’ve already written about Captain Jack’s sexuality, but more and more his lascivious remarks (aimed at both men and women) seem more like, well, workplace sexual harassment than ground-breaking visions of a post-sexual identity world. Thankfully, this episode pushed the increasingly-annoying Jack to the background and focused on Gwen, whose attempt to balance her life outside Torchwood with her career battling creepy-crawlies has made her the most compelling character on the show. Rather than “go large,” with end-of-the-world scenarios or crazy aliens, this episode went small, with a pretty straightforward “missing persons” plot, and Gwen battling Jack for answers on behalf of the people left behind. Sure, it was the “Rift” that was kidnapping people, spitting them out deformed, aged, and nuts; but the sci-fi aspects were really kept to a minimum. The real focus was the agony of loss, and whether you’d really want to know the terrible fate of a loved one, rather than hold onto the slim hope contained in a mystery. Impressively, the episode didn’t take sides; Gwen’s battle for truth seemed righteous, but did she end up causing more pain? It was all surprisingly touching, if a bit “Lifetime-y.” Apparently the season finale has already aired in the UK (spoiler alert!!), while we have to wait two more weeks to see what happens. Will Torchwood end up as the “imitation Buffy” it’s felt like all season, or will it forge a new path?