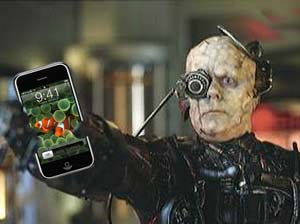 Steve Jobs has announced the introduction of new iPhone models, slashing the baseline price in half to $199. The new models will run on 3G technology, allowing for faster internet access and download speeds, and will feature GPS, so you always know where you are. While Jobs himself just called the new phones “zippy,” others have decided that higher-speed internet access and the possibility of unlimited music downloads may be “as important a moment in musical history as the invention of the gramophone.” At the risk of sounding like an alarmist Luddite, I’ll take it further: the new iPhone brings us one step closer in our inexorable progress towards becoming The Borg.

For those in the audience who aren’t helplessly geeky, The Borg are Star Trek villains, a collective of cybermen whose bodies have been implanted with scary-looking technology, and whose persistent pursuit of perfection drives them to “assimilate” as many unwitting species as they can. While they basically function on the show as a bunch of sci-fi zombies, their wireless connectivity is probably their most creepy trait, as all individuals’ identities are subsumed under their always-on link-up to the hive mind. No word on what the monthly fees are for service like that.

So, back on Earth, say your new 3G iPhone can stream music from the internet just as fast as it can play it from your hard drive, and say Apple comes up with some sort of Zune-like subscription plan. You don’t even need that hard drive any more, since you can always listen to any song ever made, wherever you are. How, exactly, will this change us? Well, the internet’s already made me more greedy: if I hear a song on the KCRW Music stream and I can’t immediately locate an mp3 on a blog search, I’m really perturbed: I want it nowww. Now, with all-points access to the entire history of music around the corner, I can’t help but look back with a bit of nostalgia to the days that Anton Corbijn described today in an interview on NPR’s Fresh Air, the days when buying a record was “an event”:

I’m old fashioned, I’m romantic, because I still like vinyl. I like the sound of it, I like the look of it, I like the way you open an album, everything about it. You can see it in the first scene in Control, when Ian comes home having bought Aladdin Sane by David Bowie, and that’s the event of the week. You come home with the record, you go to the bedroom with it at your parents place, you take the record out of the bag, you look at it and everything… Now of course for young kids, everything is available at all times, it doesn’t have the same meaning in life any more.

As I’ve said before, I’m of two minds on this topic: a romantic love for the “slow food” of vinyl, and a ravenous inner Borg that wants everything all of the time. Can these two minds continue to coexist, or will we all be assimilated when the 4G iPhone Implant comes out? Well two questions: how much is it, and does it come in Cyberman Silver?