The Dow Jones Industrial average just closed for the day at 10609.66, about 50 points lower it was the week George W. Bush took office as president of the United States.* In seven and a half years, GOP stewardship of the economy has produced negative results in the stock market. Remember, this is the same stock market that the Bush administration (and John McCain) wanted to invest your Social Security money in. That money would have been managed, in part, by now-bankrupt Lehman Brothers and no-longer-independent Bear Sterns and Merrill Lynch. 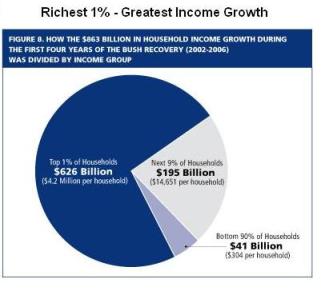 Remember, it’s not just the stock market that’s done poorly under Republican leadership. It’s also most Americans. GOP economic policies have redistributed wealth upwards, benefiting the private-jet-and-personal-megayacht set but leaving almost everyone else, including many who would technically be considered “rich”, behind. Between 2002-2006, the bottom 90 percent of Americans got 4 percent of the nation’s income growth, according to figures from the Center for American Progress (PDF). (The great chart to the right is from that same report). The 15,000 richest families in America got 25 percent of the income growth, and the median household income was 0.6 percent lower in 2007 than in was in 2000. And all these figures were calculated before the turmoil of 2008 and the chaos of the past week.

A lot of people can get as far as acknowledging the weakness of the Bush economy, but can’t link the problems to John McCain, who they see as a different character altogether. But the important thing to remember is that McCain supports all the same economic policies Bush does: massive tax cuts for the megayacht crowd and peanuts for the rest of us; social security privatization (he thinks it’s a “disgrace); the continued presence of the corrosive influence of lobbyists in Washington politics; and, despite his recent “conversion,” massive deregulation of the financial sector. Plus he has no solution for the tens of millions of Americans who lack health insurance. Bill Clinton won the election in 1992 by promising that he would deliver better economic performance for more people that George H.W. Bush had delivered in his four years as president. Clinton kept his promise. Barack Obama needs to do a better job of making his.