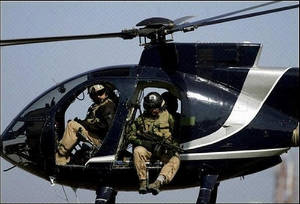 It’s now been over a year since Blackwater contractors opened fire in a Baghdad traffic circle, killing 17 Iraqi civilians and wounding 24 others. (To date, no one has been charged with a crime, but six Blackwater guards received target letters from the Justice Department in August, indicating that indictments could soon follow.) The shootings set off a firestorm of media criticism and a renewed effort in Congress to rein in the private security free-for-all in Iraq.

To that effect, the State Department, acknowledging problems with the collection of evidence at Baghdad’s Nisoor Square, established a special force tasked with investigating suspected contractor crimes. According to State Department Undersecretary for Management, the new Force Investigation Unit (FIU) was to be “composed of State Department employees.” But in a twist that should not surprise any of us at this point, it turns out that more than half of the new unit is staffed with private contractors. According to ABC News, eight members of the FIU are on loan from the U.S. Investigations Services (USIS), a private company, in an “apparent violation of federal regulations that prohibit such work by contractors.”

Senator Russel Feingold, Democrat of Wisconsin, recently fired off a letter to Condoleezza Rice calling the use of private contractors to investigate other private contractors “highly troubling” and demanded that all FIU positions be filled by federal employees. “Anything less will further exacerbate tensions within Iraq and the region caused by our perceived failure to hold U.S. contractors accountable for misuse of force against civilians,” he wrote.

The State Department has yet to respond.

Photo used under a Creative Commons license from James Gordon.