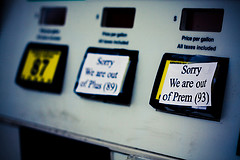 The Citizen-Times reports that while Asheville’s gas problems are improving, similar shortages throughout the Southeast mean that supplies could decline again over the next few days. In Atlanta things are so bad that Georgia’s governor wrote to President Bush to ask him to step in. Even Newt Gingrich has noticed, telling the AP that the Southeast is “like a Third World country.”

Speaking of politicians, here’s something else: Barack Obama is apparently going to be hanging around Asheville over the next few days as he preps for his second debate with John McCain, scheduled for next Tuesday in Nashville, Tenn. The debate will be town-hall style, which means residents of Nashville—another city hard-hit by the gas shortage—will be asking the questions. Though the crisis has gained national attention over the past week, the candidates haven’t weighed in yet. What solutions will they offer Tuesday night?

Photo used under a Creative Commons license from abbyladybug.