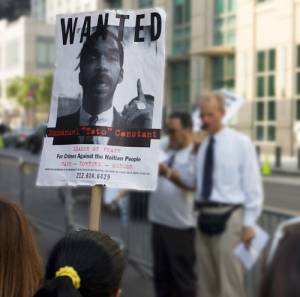 In a surprising twist in the American housing crisis, Judge Abraham Gerges in Kings County, New York, handed down a stiff sentence to Haitian-born Emanuel “Toto” Constant on October 29: 12.3 to 37 years for mortgage fraud.

If almost four decades in prison seems rather severe for white-collar crime, observers point out that, as Mother Jones wrote of Constant, he was also a violent criminal, responsible for numerous beatings, kidnappings, rapes and murders in his native Haiti during the early 1990s. Constant founded the Front for the Advancement and Progress of Haiti (FRAPH), which can be characterized as part political faction, part charity, part gang, and part terrorist organization whose goal was to intimidate supporters of Haitian president Jean-Bertrand Aristide.

Leaving Haiti when the situation became politically difficult, Constant sometimes bragged that he enjoyed a close relationship with the CIA. A federal immigration judge signed an order to deport Constant to Haiti in September 1995 but the Clinton Justice Department later ordered the INS to release Toto. After 1996 the former torturer lived openly in Queens. Many believed the American government protected Constant because of his role in suppressing supporters of Aristide. Free from legal pressure, Constant went into real esate. He also got involved in new and more complicated crimes. Apparently while working as a real estate agent in Queens, he took part in a scheme that defrauded several banks of more than $1 million.

Like Al Capone, sentenced to 11 years for tax evasion in 1931, the judicial system has now nailed Constant for the least of his crimes, but nailed him all the same. Judge Gerges reportedly took Constant’s crimes against the Haitian people into account when determining sentencing. Jennie Green of the Center for Constitutional Rights said of Constant’s jail time: “One day, when the Haitian government and courts are in the position to hold him accountable, Constant will return to Haiti to be tried for murder, rape and other torture in his campaign of terror as head of a paramilitary death squad.”

Anyone want to bet on when that will happen?