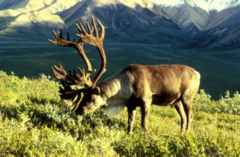 If health problems and polluted rivers weren’t enough reason to worry aboout Canada’s energy boom, here’s another red flag: Declining caribou. According to a report scheduled to be released today by the Canadian government, herds of woodland caribou are struggling to survive in the boreal forests of southern Canada:

Parts of the highly technical, 300-page report show caribou herds are likeliest to decline in northern Alberta, northern Saskatchewan and the Northwest Territories.

A boom in natural resources such as oil and gas has spurred industrial development in those parts of the country, disturbing the caribou’s habitat.

Of 57 recognized herds, 29 are are “not self sustaining,” says the report. If the current trend continues, woodland caribou could be gone by the end of the century. For a great visual, check out National Geographic‘s photo essay on the tar sands. Doesn’t exactly look like caribou paradise.