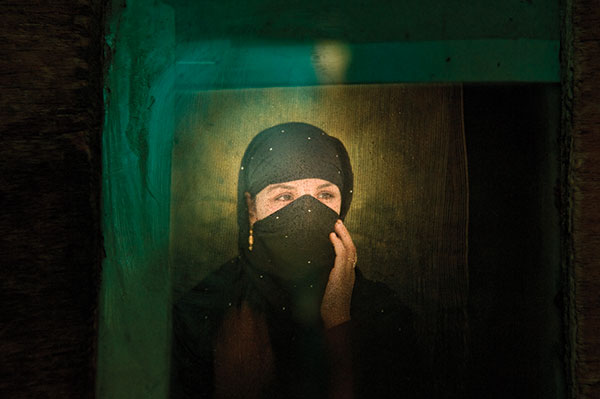 See more of Lana Šlezi?’s portraits and her photo essay “The Hidden Half” here.

The US invasion put an end to Taliban-era restrictions on women in the workplace, school, voting, and public office. And in theory, at least, Afghans support those changes: Last year, a countrywide survey of 6,593 Afghan men and women revealed strong support for women‘s right to attend school (89 percent), vote (84 percent), and work outside the home (69 percent). More than half said that women should be represented equally in leadership positions. But as novelist Khaled Hosseini points out in “MoJo Interview: Khaled Hosseini, Kabul’s Splendid Son,” those attitudes are put in practice primarily in Kabul, historically something of a cultural island. Across Afghanistan, 57 percent of girls marry before age 16, as many as 80 percent against their will. Boys outnumber girls in secondary school by more than 3-to-1, and the UN logged 293 school-related attacks this past year, a 26 percent jump from 2007—at least 721 schools have been closed due to attacks or threats. Kavita Ramdas, head of the Global Fund for Women, doesn’t find these contradictions surprising, given Afghans’ antipathy toward outsiders telling them what to do. “It isn’t that there aren’t ordinary Afghans who want their daughters to go to school and have the chance to work…but they are a very proud people.” Rather than bankrolling armies of foreign nonprofits, she says, we should be opening our wallets to Afghan civil groups—particularly ones run by women. “Afghan women will make more strides,” Ramdas says, “when their struggles are seen as their own.”