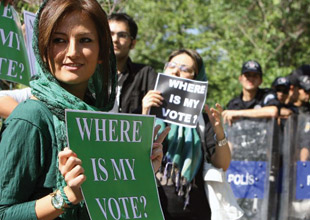 In his first public sermon since last Friday’s presidential election, Iran’s supreme leader, Ayatollah Ali Khamenei, issued a stark warning to the opposition leaders who are disputing Mahmoud Ahmadinejad’s re-election: halt the protests or be “responsible for bloodshed and chaos.”

Khamenei charged that the public dissent that has swept Tehran this week “questions the principles of election and democracy.” Opposition leaders and their supporters reportedly did not attend, and have yet to respond.

In the last few days, supporters of Mir-Hossein Mousavi and other reformers had hoped that the outpouring of discontent across Iran might cause the Guardian Council and other authorities to take a more conciliatory stance. Instead, the ayatollah threatened a violent crackdown, leaving the opposition very little room to maneuver.  Following the sermon, Wayne White, a former State Department intelligence analyst with expertise on Iran, sent out an email to colleagues concluding that the sermon does not bode well for the reformers:

Those who have talked of the regime’s need for compromise, Khamenei’s fears and hesitation, etc. urgently need to reconsider seriously the overall situation.

Khamenei’s sermon today appeared to have closed the book on substantial concessions to the opposition and its ardent supporters on the streets. Although the Guardian Council’s review might still be underway technically, Khamenei reiterated flatly that Ahmadinejad was and remains the winner and warned protesters to get off the streets or face and be responsible for the consequences. In fact, Khamenei rendered an accurate evaluation of the relatively insignificant investigation and partial recount supposedly underway: the margin of victory the regime has accorded Ahmadinejad (albeit falsely and shamelessly) was so wide that the collection of individual complaints involved in the recount probably could not erase Ahmadinejad’s victory (even if most all of the complaints were ruled valid by a biased Guardian Council led by a notorious hardline cleric who probably was party to the election theft scheme in the first place).

The conservative, anti-reform establishment’s patience would appear to have worn out at this point, and now we can expect a ramped-up crackdown on demonstrations and other signs of dissent with most of the media previously able to record such ugly, brutish behavior now largely swept conveniently away and much of the country’s prominent reform-oriented leadership behind bars. Many accurate reports on the unfortunate events to come doubtless will get out to the world, but probably only the proverbial tip of the iceberg regarding the totality of the violence that may well be pending. As has been the case already (especially away from the main demonstrations and in other cities beyond Tehran less generally accessable to the media), the crackdown will likely become gradually more severe and more costly in terms of casualties, with the regime hoping that such a paced escalation can drive the protests to ground without one huge confrontation.

A report this morning by email or some such routing from Iran read out on, I believe, CNN came from a hospital (specific location unknown to me) speaking of numerous civilian casualties flowing in—both dead and badly wounded—with authorities arriving to prevent any personal data from being recorded and taking away the arrivals. Such is being carried out by the same ruthless, fanatical elements that dragged an ailing Ebrahim Yazdi out of a hospital intensive care unit on Wednesday. I very much fear that this is the future.

I would like nothing more than to post analysis that would convey more hope and less in the way of dire warnings, but, with considerable sadness, the above is what I truly believe to be yet another emerging bottom line that will increasingly define the remainder of this crisis. Over the long-term, especially with the steady mounting of demographics largely against this now more bare-knuckled, abusive authoritarian order, the days of the regime are numbered, but the robust, admirable challenge mounted in the course of this crisis may well be unable to overcome such violent countermeasures this time around. [Emphasis added.]

In his sermon, the ayatollah made a point of calling Ahmadinejad’s re-election an “epic moment that became a historic moment.” If White is correct, the aftermath of the election will indeed be “epic” and “historic”—but not for the reasons that the ayatollah believes.