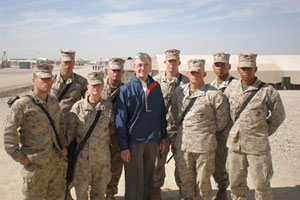 President Barack Obama will appoint yet another moderate Republican to a top post in his administration on Tuesday. Obama’s expected nomination of John M. McHugh, a GOP congressman from New York, to be Secretary of the Army comes less than three weeks after the president picked Jon Huntsman, the popular Republican governor of Utah, as his ambassador to China.

The nomination follows a pattern. While the Republicans Obama has asked to join his team have been unquestionably qualified for the jobs he selected them for (Huntsman speaks Mandarin; McHugh is the top Republican on the Armed Services committee), the picks have also provided Obama with clear political advantages.

In the space of less than a month, Obama has brought a potential 2012 presidential rival, Huntsman, onto his team and, with the nomination of McHugh, gave Democrats a chance at winning one of the last three House seats in New York still held by Republicans.

Obama’s abortive pick of Judd Gregg, a GOP Senator from New Hampshire, to be his Commerce secretary would have also helped Democrats. If Gregg had joined the administration and an interim Senator had been appointed in his place, it would have given Paul Hodes, the Democratic congressman who is running for Senate in 2010, a clearer path to the upper house. (As it stands now, Gregg has said he will retire and not run for reelection in 2010, but that could always change.)

Obama’s outreach to his right recalls no one if not Ronald Reagan. Last month, columnist Mark Shields wrote:

In 1980, the Republicans under Ronald Reagan’s leadership were recruiting with open arms disaffected members of the opposition. Remember “Reagan Democrats”? In 2008, Barack Obama repeatedly courted Republicans and other non-Democrats to his campaign and cause. His efforts were rewarded in November when he carried independents, suburbanites and Catholic voters.

Now there are 177. By reaching out to his opposition, Obama is also shrinking it.