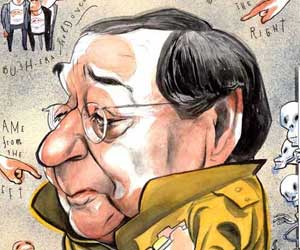 This week Jane Mayer interviewed CIA Chief Leon Panetta in The New Yorker. The mainstream press highlighted Panetta’s comment about Cheney’s dire predictions: “I think he smells some blood in the water on the national-security issue,” he told me. “It’s almost, a little bit, gallows politics. When you read behind it, it’s almost as if he’s wishing that this country would be attacked again, in order to make his point. I think that’s dangerous politics.

Buried on page 57 is the news about three prisoners who died in our hands, by our hand. And in particular, Manadel al-Jamadi, about whom we know nothing. Except that he was hung blindfolded, by his wrists, his ribs broken. He died that way, November 2, 2003, basically crucified. In my piece for the article I looked at the stressors on Panetta. You could also consider the stressors on the CIA: those between the moral voice of Obama and the pull of Cheney and those he left behind. And to then consider Manadal al-Jamadi and…how many others.