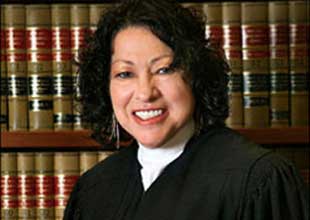 MoJo D.C. bureau Legal Affairs reporter Stephanie Mencimer is reporting live from inside the Sotomayor confirmation hearings this week. This is the wrap-up of Wednesday’s action. If you missed Monday or Tuesday, check out the wrap-ups: Pride and Prejudice and Where Did Sotomayor’s Empathy Go? For the latest analysis, watch our video and live blog here, or follow Stephanie’s and David Corn’s coverage on Twitter.

After three days of Senate confirmation hearings, we’ve learned a lot of things—none of them, of course, about Sonia Sotomayor. Instead, the hearings have clarified a great deal about what the two political parties really care about when it comes to the Supreme Court, which can be boiled down to this:

* The supremacy of old white guys

Republicans also devoted a lot of time to grilling Sotomayor on the relationship between Court and Congress. That is, they tried to get her to promise to keep her hands off their legislation even if it’s crazy. Yesterday, Sen. Lindsay Graham informed Sotomayor that the best way to “change society” was through the polling booth, not by judicial fiat. But should people at the voting booth decide they want to, for instance, ban handguns in the District of Columbia, those same senators want to ensure Sotomayor will overturn the will of the people or get out of the way so the rest of the court can do it.

Over and over, the GOP senators tried to get Sotomayor to recuse herself from the many gun cases headed for the Supreme Court next term. Those cases will give the court the opportunity to decide whether its decision in the Heller case—that the 2nd Amendment guarantees an individual right to bear arms in the District of Columbia—should also apply to the states. So far, the lower courts have said that the 2nd Amendment doesn’t apply—including Sotomayor’s Second Circuit. As with virtually every other question she’s been asked, Sotomayor refused to commit one way or another. Which means we’re going to have to listen to more of this stuff tomorrow.

None of the rehash has provided any particularly new revelations about the nominee. If she revealed any prejudices or biases under questioning, it wasn’t for Latinos or women, but for prosecutors and cops. (MoJo’s James Ridgeway has more on her prosecution-friendly record here.) No one seemed particularly concerned by her comments suggesting that it was okay for cops to violate people’s constitutional rights so long as a judge signs off on it. Democrats actually wielded a study showing that as a district court judge, Sotomayor convicted criminal defendants at a higher rate and gave them longer sentences than most of her colleagues. This is a very odd selling point coming from a party proposing a major overhaul of the criminal justice system.

Sotomayor seemed to hit her stride today, exhibiting more confidence and pushing back a little against her antagonists. She also politely endured questioning by Sen. Tom Coburn, who told her, in an apparent reference to the Hispanic character on I Love Lucy, “You have lots of ‘splainin’ to do.” (See the video clip here.) Coburn spent much of his time quizzing the nominee about the intricacies of fetal viability and whether the states had the right to define “death.” Sotomayor looked slightly perplexed, but she deflected the weirdness with a cheerful smile.

The day’s highlight came courtesy of Sen. Al Franken, who, as John Dickerson of Slate observed, finally cracked his first joke since running for office. (Watch the video below.) Franken grilled Sotomayor on how she could have been inspired to be a prosecutor by Perry Mason when the prosecutor on the show always loses. Later, Franken asked Sotomayor if she knew the one episode in which Mason loses a case. She didn’t, causing Franken to exclaim, “Didn’t the White House brief you?” And of course, everyone laughed, including the nominee, who looked like she was finally enjoying herself.