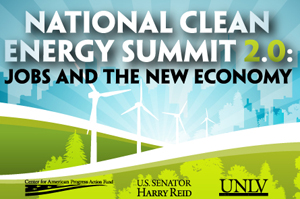 No one has ever accused the military of being a bunch of treehuggers—but that doesn’t mean they’re blind to the military and strategic implications of global warming.

“We will pay to reduce greenhouse gas emissions today,” said retired General Anthony Zinni in a New York Times article yesterday, “…or we will pay the price later in human terms.”

The article by NYT writer John Broder is particularly well-timed.

Tomorrow, former Commander-in-Chief, Bill Clinton, will address a “National Clean Energy Summit” in Las Vegas. While the theme of this year’s summit (the first was held last year) focuses on jobs, the Times article dovetails perfectly with the larger context of the gathering: the dawning reality that no area of human activity will be untouched by a changing climate. From jobs to wars, the facts are the same.

Studies by military and intelligence analysts warn of “profound strategic challenges” to the US due to the affects of climate change, reports Broder. The climate-induced crises include famine, water wars, mass migration, epidemics and massive storms.

While the military is not an environmental organization — think Agent Orange or nuclear testing in the Pacific — their view is and always has been utilitarian and mission-driven. Sometimes, environmental and military needs coincide. That’s the case now with global warming — just as it was in 1817 with a different issue.

You needed wood to build and maintain a fleet in the 19th Century and so the Secretary of the Navy reserved large swaths of hardwood forests on the east coast. Deforestation was halted (for a time) for national security reasons.

Maybe someone should print a bumper sticker (if one doesn’t already exist): Support the troops. Fight global warming.

Check back here tomorrow when I’ll be live blogging the summit.

The first session begins at 10 AM (1 PM on the east coast) with opening remarks by Al Gore, Gov. Arnold Schwarzenegger, John Podesta (the Center for American Progress is a host of the event) and other heavy-hitters. Should be interesting. You can check out the agenda yourself, here.

Osha Gray Davidson edits The Phoenix Sun and is a contributing blogger for Mother Jones. For more of his stories, click here.