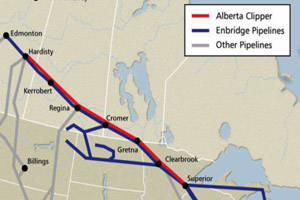 Today, the State Department announced that it has okayed a new oil pipeline between Canada and the United States. A press release hails the decision to break ground on the Alberta Clipper Pipeline for sending “a positive economic signal, in a difficult economic period, about the future reliability and availability of a portion of United States’ energy imports” and for providing “shovel-ready” jobs. What it doesn’t mention is that the pipeline between Alberta and Wisconsin will be pumping oil from Canada’s tar sands—some of the world’s dirtiest petroleum. As Mother Jones‘ Josh Harkinson reported in a gripping first-hand dispatch from the “Tar Wars,” Canada’s oil boom is exacting a heavy toll on the rural areas surrounding the massive pits that comprise the largest industrial zone in the world. For every barrel of oil produced from the tar sands, another two of toxic waste are left behind. Indigenous Albertans worry that their water and wild game have been dangerously contaminated. And that’s not all: Squeezing oil from tar sands emits 151 percent more greenhouse gases than the production of conventional oil (including 80 percent more CO2). The official justification for the new pipeline echoes the Bush administration’s policy, which put “energy independence” ahead of environmental considerations. Yet the State Department insists that the US is still committed to taking “ambitious action to address climate change” and getting Canada to follow suit. Sounds like a pipe dream.