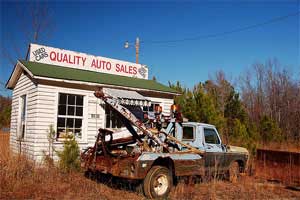 THE PHANTOM TRADE: Navy Culinary Specialist Joe Lee thought he’d gotten a sweet deal on a used Mercedes. Then he learned that the Norfolk, Virginia, dealer never paid off the loan on his trade-in, a common scam. It simply sold his old Hyundai and pocketed the cash, plus money he’d put up to cover the old loan. Now Lee is stuck with two payments.

THE YO-YO SALE: In this classic credit ruse, you leave the lot with one interest rate only to be called back and asked to pay a higher one. Army Specialist Michael Hill smelled a rat after his Florida dealer claimed financing had fallen through on the used Acura he’d bought the week before. He and his wife refused to bring it back, so the dealer retaliated with phone calls, five an hour, threatening arrest—until they hired a lawyer.

THE HOT BOX: If you fall for the yo-yo (see above) and return the car, then they’ve really got you. Airman Sandy Lieu was stuck at a Florida dealership for more than six hours; salespeople threatened to have her arrested if she took the car back home, but if she ditched it there, they’d impound it at her expense. When Lieu balked at the higher interest rate, a saleswoman claimed she was “making the Air Force look bad.”

THE STEALTH REPO: In June 2006, former Navy Petty Officer James Tapio, recently disabled in Iraq, tried to buy a used Ford Expedition. The Florida dealer jerked him around for months with various yo-yo scams—making him sign new contracts and put down more cash. Then Tapio woke one morning to find his ride repoed without explanation. The dealer refused to return Tapio’s trade-in car or his $5,000 down. Tapio finally got a lawyer and prevailed when the case settled.

THE NO-SERVICE CONTRACT: Used car dealers, amazingly, are not required to disclose a car’s known defects to the buyer, a fact that makes the service contracts they peddle even dicier. When the front end of Marine Corporal Adam Nowak’s Mitsubishi Eclipse collapsed on the road, his overpriced contract wouldn’t cover repairs—the car had previously been in a head-on collision. His dealer refused to provide a refund.