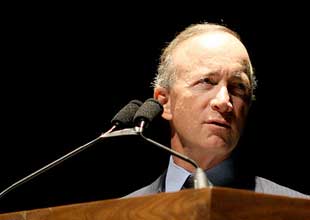 As Republicans cast about for their “great white hope,” as Kansas Rep. Lynn Jenkins recently put it, they’ve had trouble finding a potential presidential contender who can hold up under scrutiny. Sex scandals have crossed South Carolina Gov. Mark Sanford and Nevada Sen. John Ensign off the list. Former governor Sarah Palin is mostly tabloid fodder. As for Mississippi Gov. Haley Barbour, his corporate lobbying history might put him out of contention. So these days, the party is looking to its bench, and lately, talk has centered on Indiana Gov. Mitch Daniels.

The pro-Daniels buzz began in earnest after he headlined the GOP’s weekly radio address at the end of May criticizing the Democrats’ cap-and-trade bill. Not long afterward, the Washington Examiner ran a story with a headline blaring, “Can Mitch Daniels Save the GOP?” Michael Steele, chairman of the Republican National Committee, fueled the gossip mill when he told the AP last month in a story about Daniels’ presidential prospects, “Mitch has been steady to the cause, he’s stayed principled…The nation is going to recognize him.”

Daniels has spent considerable time inside the Beltway and understands how Washington works better than most. And he’s been a popular governor, despite having privatized one of Indiana’s toll roads, awarding the contract to a foreign entity. But before the bandwagon gets too far out of the barn, it might be useful to revisit Daniels’ record, particularly his critical role in the administration of former president George W. Bush.

Back in 2001, when I was an editor at the Washington Monthly, we published a lengthy article on Daniels entitled, “Dick Cheney’s Dick Cheney.” The comparison was apt: Like Cheney, Daniels had served in the Reagan administration, he presented a cool, grown-up demeanor, and he was a stalwart conservative Republican who believed in the old mantra: smaller government, lower taxes. He also was extremely competent and knew how to move the wheels of the bureaucracy as Cheney did.

As vice president, Cheney had personally tapped Daniels, then a top executive at the drug company Eli Lilly, to serve as Bush’s OMB director. There, he became a key architect of Bush’s $1.6 trillion tax cuts. The old Monthly story paints a portrait of a man who, much like Mark Sanford, is known personally as a major tightwad—a quality that no doubt appeals to disgruntled Republicans who believe the party has become dominated by big spenders. Author Nicholas Thompson wrote of Daniels:

[H]e is as tightfisted as they come. He ruthlessly cut budgets at both Hudson and Eli Lilly, and he tried to get the Rolling Stones’ “You Can’t Always Get What You Want” played for people put on hold by OMB’s phone system. Herb London, the current president of the Hudson Institute, calls Daniels “viscerally parsimonious.” Daniels told Time magazine that as a young man he once plucked quarters out of a toilet bowl to pay for a pitcher of beer. Today, he still hunts down every single golf ball that he swats into the woods. “I saw in the paper that he was worth something like $38 million,” says [former George W. Bush adviser] Al Hubbard. “I guarantee his wife was the most surprised person in the world when she read that. She probably thought he wasn’t worth 38 dollars.”

But Daniels’ parsimony didn’t seem to apply to many of Bush’s pet projects, namely his tax cuts. Thompson writes:

When asked later whether it ever crossed his mind that, given the uncertainty of the projected surpluses, $1.6 trillion might prove extravagant, he coolly responded: “I think it was appropriate for now. It might prove to have been too little.”

Daniels’ predictions about the tax cuts weren’t the only ones to prove spectacularly wrong. Thompson wrote, “In early 1994, [Daniels had] chided critics concerned about rising health-care costs and the number of the uninsured Americans by telling The Washington Post: ‘Markets do self-correct, and this one is well into the process. As usual the politicians are several miles behind the market.'”

Thompson’s story also presaged Daniels’ most unforgivable miscalculation. At OMB, Daniels was in charge of estimating the potential cost of the Iraq War, which he suggested would be “an affordable endeavor.” In late 2002, he told the New York Times that the Iraq War would cost only $50 to $60 billion, largely because the Iraqis would not need sustained aid. He was one of the most prominent White House officials to publicly flog former economic adviser Lawrence Lindsey, who some believe was fired for suggesting in 2002 that the war would more likely cost between $100 and $200 billion, a figure that is proving mostly accurate.

This spotty history didn’t deter Hoosiers from electing Daniels twice as governor, but they’re a pretty conservative bunch. It’s not so clear that the rest of the country will be so forgiving of his role in wrecking the economy during the Bush years. But who knows? 2012 is still a long way away. The GOP’s biggest problem with Daniels right now? He says he doesn’t want the job. Of course, the road to the White House is littered with people who said the same thing. Compared to the other likely contenders for the White House, Daniels looks like a viable candidate, which may say more about the GOP field than Daniels himself.