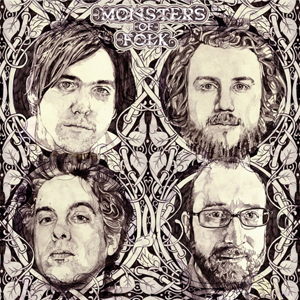 Let’s pretend that Monsters of Folk is, true to its tongue-in-cheek name, actually a supergroup. The first rule of supergroup appreciation is that you have to pick your favorite member. Sometimes it’s a tricky choice: Nelson, Lefty, or Lucky Wilbury? Willie, Johnny, or Waylon? In Monsters of Folk, you have your pick of four artists who are neither real folkies nor real rock stars: M. Ward, Conor Oberst, Jim James, and Mike Mogis. Before even picking up their self-titled disc, my money was on M. Ward. I still have his Transfiguration of Vincent and Post-War on heavy rotation and even though his recent efforts have gone a bit soft (the inoffensive Hold Time and She & Him, a collaboration with the adorable yet Auto-Tune-worthy Zooey Deschanel), I’m a sucker for his melancholy pop.

Bright Eyes frontman Conor Oberst would be my runner-up, but only because I’ve never really listened to James’ My Morning Jacket because the phrase “jam band” is often in proximity to its name, fairly or not. Bright Eyes’ I’m Wide Awake It’s Morning was great, but I have a low tolerance for Oberst’s earnest warbling. And I must confess I have never heard of Mike Mogis (a member of Bright Eyes, and as the M.O.F.’s pinch hitter-slash-engineer, its Jeff Lynne, to borrow a Wilbury). So doing some quick supergroup mental math, I figured if M.O.F. was half as enjoyable as an M. Ward album, I’d be content.

Call me happy, then. After listening to M.O.F. on earbuds and speakers, attentively and as background noise, I’m thoroughly hooked. Though there’s some of the obligatory supergroup-style alternate verse singing, none of the songs feel like they’ve been written or performed by committee. No one hogs the spotlight, even though in terms of recognizable songwriting, M. Ward comes off as the group’s dominant member, but just barely; “Baby Boomer,” “Goodway,” “Slow Down Jo,” and “The Sandman, The Brakeman and Me” have his trademark old-timey sound. No fewer than four of the album’s 15 tracks have Oberst’s stamp on them, but that’s not always a bad thing. The quietly urgent “Ahead of the Curve” is a standout, yet the allegorical “Man Named Truth” throws subtlety out the window. (Don’t ever buy nothing from a man named Truth.) James isn’t overshadowed here: His “Magic Marker” is a gem (gotta love his use of the old Tootsie Pop jingle, How many licks does it take…?) and “The Right Place” is a pitch-perfect alt-country tune. Both are reassuringly jam-free.

The album opens with an anomalous track, “Dear God (Sincerely M.O.F),” whose drum-machine loop, harp swells, and falsetto doo-wops suggest that it might belong on Monsters of Soft Rock. But it turns out to be one of the most memorable tracks, and its lyrics strike an agnostic note that is picked up again in the album’s closer, the low-key anthem “His Master’s Voice” (mohammed and christ speak twice as nice…/but the one that i like best—he sings inside my chest…) It’s not all mellow introspection—there’s also a couple of catchy, rockin’ tunes, “Say Please” and “Losin Yo Head.” M.O.F. is as eclectic as the would-be superstars behind it, but there’s nary a stinker in the bunch. Folk yeah!