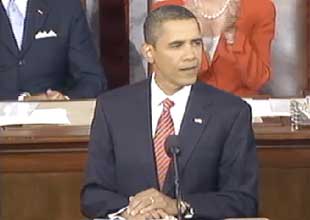 Can a speech change a political dynamic?

President Barack Obama and his political wizards obviously hope so. Together they came up with an address that at least on Wednesday night made it seem as if Obama was in charge of the health care reform process—which has not been the case since he handed off the hard work to Congress months ago. Obama finally defined fully the debate, the policy, and the values underlying the need for reform. He was both practical-minded and passionate. He was combative at moments, and reasonable-sounding at others. He showed some of his cards, though not all. The question is, can a powerhouse of a speech at this point in the process—when various camps have dug their trenches—alter the terrain? Can Obama, with words alone, truly seize control of the messy endeavor of overhauling the nation’s health care system?

Much of the speech was not a surprise. Obama outlined his own plan, as the White House posted it online. He craftily focused first on people who have insurance, noting that his plan would provide them “security and stability.” Given that most Americans have insurance and many are somewhat satisfied (or used to) the coverage they have, a large chunk of the public is not responsive to a call for systematic change. After all, things can always get worse. But Obama zeroed in on the well-justified anxieties of the already-insured, noting that his version of health care reform would force insurance companies to end many of the practices that frighten and enrage consumers—such as denying coverage based on pre-existing conditions, capping coverage, and refusing to pay for routine checkups and preventive care, such as mammograms and colonoscopies.

Obama hammered the insurance companies, reciting nightmare stories, such as the tale of a Texas woman whose breast cancer treatment was cut off because she had forgot to declare a previous case of acne. He made his point in a simple manner:

As one former insurance executive testified before Congress, insurance companies are not only encouraged to find reasons to drop the seriously ill; they are rewarded for it. All of this is in service of meeting what this former executive called “Wall Street’s relentless profit expectations.”

Even some Republicans stood and joined the on-their-feet Democrats when Obama blasted the insurance companies for such actions. This placed Obama in a combative role, and it served him well. It’s tough—maybe impossible—to achieve significant change in Washington without mounting a fight, and one way for a commander-in-chief to show he is in command is to wage a battle. Obama looked like he was ready for a fight.

Yet he also came across as a fellow seeking the best deal that could be accomplished. He took polite shots at both the right and left, observing that proposals for a single-payer system and for a market-based system had their merits. And he positioned himself between these polar opposites, in the middle, eschewing any “radical shift.” The message: I’m for conservative change, not revolutionary change. He equated the fear-mongers (read: Sarah Palin and the “death panels” brigade) with those who have “dug into unyielding ideological camps (read: the public-option-or-die progressives)—which probably ticked off some liberal House Democrats.

As for the public option, Obama hailed it as a valuable provision—while contending that setting up a new government-run insurance program was not the only way to hold down the cost of insurance. He called the public option “an additional step we can take to keep insurance companies honest”–not a step we should take. He urged both the left and the right not to exaggerate its significance, essentially pleading with progressives to keep their eyes on the “ultimate goal”: making coverage available for those lacking it. Obama referred to other possible means to reach that end: a trigger that would set up a public option if insurance companies don’t offer affordable plans, or some sort of co-op or non-profit entity that could provide low-cost coverage. This will likely not satisfy the House Democats insisting on a public option. Yet Obama did toss the left a grand promise: “I will not back down on the basic principle that if Americans can’t find affordable coverage, we will provide you with a choice.” Democrats cheered that vow; Republicans were mute.

Obama covered all the bases. He reassured seniors about Medicare. He explained how his plan would provide coverage to the uncovered and how mandates would work. He maintained the measure would not add to the deficit, poking at his predecessor:

Part of the reason I faced a trillion dollar deficit when I walked in the door of the White House is because too many initiatives over the last decade were not paid for—from the Iraq War to tax breaks for the wealthy.  I will not make that same mistake with health care.

And Obama offered Republicans a sweetener, saying he was open to demonstration projects involving medical malpractice reform, while remarking that he did not believe that such measures offer “a silver bullet” for bringing down health care costs. It’s doubtful GOPers will renounce their rejectionism for a few malpractice reform projects, but this did make it seem that Obama was trying to work with the other side. Independents, please take note.

Throughout the speech, the imagery was all in Obama’s favor. Several times, the cameras panned scowling GOP senators and representatives–mainly, a group of white guys–while Democrats applauded Obama’s pro-consumer rhetoric. The president looked steely when he said of the “death panels” charge, “It is a lie, plain and simple.” He came across as confident when he decried “those who have made the calculation that it’s better politics to kill this plan than improve it” and declared, “If you misrepresent what’s in the plan, we will call you out.” As Obama denounced the charge that his reform effort will insure illegal immigrants, Rep. Joe Wilson (R-SC) shouted, “You lie!”—which only helped Obama look more like a conquerer. And a major act of conquering still lies before him.

Perhaps with that in mind, Obama went big (and emotional) for his finish. He quoted from a letter that Ted Kennedy had written him in May, shortly after being told he was soon to die. The letter was not to be delivered to Obama until after Kennedy’s death. Noting that health care “concerns more than material things,” Kennedy had written,

What we face is above all a moral issue; at stake are not just the details of policy, but fundamental principles of social justice and the character of our country.

Obama proceeded with an eloquent defense—no, make that an explanation—of Kennedy liberalism. It wasn’t about big government for big government’s sake, Obama said, it was motivated by a “large-heartedness—that concern and regard for the plight of others.” He put the spotlight on Republicans who had partnered with Kennedy:

Obama tied these efforts to the “history of our progress,” noting that foes tried to block Social Security and Medicare with scare tactics. But, he added, just as rugged individualism is part of the American character so is the “recognition that we are all in this together; that when fortune turns against one of us, others are there to lend a helping hand” and “sometimes government has to step in to help deliver on that promise.”

Acknowledging American skepticism of government, Obama wrapped up health care reform in a values-drenched context. Whatever happens with the public option, he was speaking the language of progressives, advancing and reinforcing their vision of America. That might win him a few chits from the left.

The speech did put Obama center-stage in the health care show. But the words will dissipate quickly. Politicians and pundits will not be quoting them next week. What matters now is how the president and his aides handle the ongoing deal-making. Obama has demonstrated he can make swell use of the bully pulpit—even if this exhibition came perhaps late. But with this speech, he probably set up the final stretch as best he could. Now Obama has to wrestle with the politicians of Capitol Hill and make good on all those powerful sentiments—to define the character of the country and the character of his presidency.

For another take on the speech see Jim Ridgeway’s report. And Clara Jeffery ponders whether Joe Wilson’s lie accusation is parlimentarian.