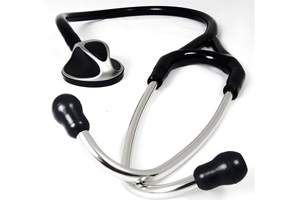 Image by Wikimedia Commons user <a href="http://commons.wikimedia.org/wiki/File:Doctors_stethoscope_2.jpg">Stethoscope</a> used under a CC License

You can’t say this enough: While members of Congress are busy protecting us from the inefficiency and danger of government-run health care, they’re receiving top-notch taxpayer funded health care—seemingly without complaint. The LA Times recently detailed the benefits: A choice of 10 insurance plans and access to a wide network of doctors and HMOs. Plus, they “get special treatment at Washington’s federal medical facilities and, for a few hundred dollars a month, access to their own pharmacy and doctors, nurses and medical technicians standing by in an office conveniently located between the House and Senate chambers.” ABC News has more on that in-house clinic for lawmakers, officially known as the Office of the Attending Physician:

Services offered by the Office of the Attending Physician include physicals and routine examinations, on-site X-rays and lab work, physical therapy and referrals to medical specialists from military hospitals and private medical practices. According to congressional budget records, the office is staffed by at least four Navy doctors as well as at least a dozen medical and X-ray technicians, nurses and a pharmacist.

Sources said when specialists are needed, they are brought to the Capitol, often at no charge to members of Congress.

Explains a former doc from the Congressional clinic, patients who can’t get treated on-site get referals to top specialists all over the country. “You would go to the best care in the country. And, for the most part, nobody asked what your insurance was.” And the cost? $503. A year.