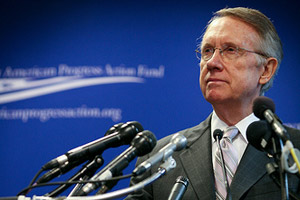 Who is this man leading the Senate Democratic caucus, and what has he done with Harry Reid?

Multiple sources are reporting that Reid’s big announcement this afternoon will be that he intends to bring a health care bill to the Senate floor that includes a public option that would allow states to “opt-out.” It will take 60 votes to strip the public option from the bill during the amendment process—votes that public option opponents don’t have right now. Democratic holdouts—presumed to include Sen. Blanche Lincoln (D-Ark.) and Ben Nelson (D-Neb.)—will be forced to actually vote against the public option instead of killing it with a “silent filibuster.”

There will be a lot of debate in the coming days about what exactly prompted Reid to include the public option in the draft bill. He didn’t have to do it, and by all accounts Reid doesn’t even have the 60 votes he’d need to overcome a certain GOP filibuster of a bill that includes public option. Reid is facing a tough reelection fight in 2010 and may have factored that into his decision, possibly to shore up support on the left, which has criticized him as a weak and ineffective leader. But unlike Chris Cillizza, Reid seems to think there might be benefits to shoring up his left flank. Ezra Klein highlighted a health care lobbyist’s speculation along those exact lines:

One Democratic health care lobbyist suggested that Reid’s trouble rounding up 60 votes to bring a bill with a public option opt-out to the floor suggests that the support isn’t there for the opt-out when it becomes time to vote on the bill. But if Reid gets the bill to the floor with an opt-out and is forced to water it down later to win votes, he can still make the case with liberals and unions that he did what he could to get it passed—a key point considering that Reid will need the left’s help in what’s shaping up to be a tough reelection bid.

This seems right. If the votes aren’t there, they aren’t there. The left was pressuring Reid to not allow a silent filibuster of its biggest health reform goal. “If Harry Reid Allows The Silent Filibuster, It’s All On Him,” Jane Hamsher warned at Firedoglake. Well, it looks like he won’t allow it. And the Democratic caucus may still filibuster itself—several “centrist” Democrats have certainly left that option open. But if Lincoln or Nelson or Mary Landrieu (D-La.) join a Republican filibuster to prevent health care reform from coming to a vote, you can bet that the left’s rage—and fundraising might—won’t be focused on beating up on poor old Harry Reid. It will be focused on the defectors.