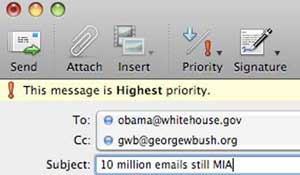 An old problem is back in Barack Obama’s inbox: What to do about millions of missing Bush-era emails?

In March, two Washington watchdog groups agreed to suspend a lawsuit against the White House—a case the Obama administration inherited from its predecessor—that aimed to force the government to recover the emails and modernize its archiving of electronic documents. At the time, the Obama administration had indicated it was willing to work toward a settlement. But months have passed with little progress and Citizens for Responsibility and Ethics in Washington (CREW) and the National Security Archive now say they are beginning to lose patience with the White House and are considering reviving the case. At stake are records that could shed light on controversies including the lead-up to the Iraq War and the leaking of Valerie Plame Wilson’s covert CIA identity.

“It’s very frustrating,” says Anne Weismann, CREW’s chief counsel. “Here we are, nine-plus months after [Obama’s inauguration], and we’re really not any closer to feeling the missing emails have been restored. It’s kind of nutty to me that it’s taken them so many months.”

Among the plaintiffs’ biggest gripes is that the Obama team is using the Bush administration’s strategy—a flawed one, the groups say—to resurrect the missing emails. The White House has hired private contractors to conduct a statistical analysis of its archived email to determine on which days messages are unaccounted for. But that’s not standard private-sector practice in these sorts of cases, says Weismann. It’s far more common for businesses that have lost emails to restore their backup tapes and compare those results with their archives, she says.

The Bush and Obama administrations have already spent at least $9.4 million on this effort—$4.2 million more than was originally appropriated—and the watchdog groups are worried that the White House will run out of money for the job before tangible progress is made.

Where has the $9.4 million gone? The plaintiffs don’t know enough to say for sure. The Bush administration said it had 38 boxes of documents that were potentially responsive to CREW’s Freedom of Information Act request for information about how the emails were lost and what the White House has done to look for them. But the Obama administration has released only a fraction of the documents. That’s not enough, says Meredith Fuchs, the National Security Archive’s general counsel. “White House personnel have alluded to, but not fully explained from a technical perspective, how the emails went missing and were mislabeled during the Bush administration,” she says. “Because they have all the information, it’s really hard for us to say whether we think this is going to be resolved at all.”

The White House did not respond to a request for comment.

“My organization has sued every president since Reagan” over electronic record keeping, but the problem still isn’t fixed, Fuchs says. “We don’t want to be suing the Obama administration, but we want to know the problem is solved.”