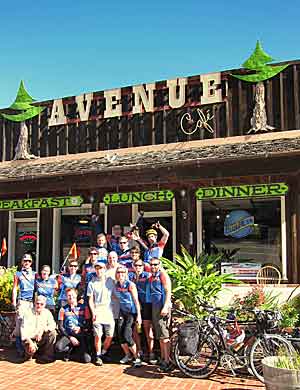 Photo of Avenue Cafe in Miranda, CA, by Lily Abood

[Guest bloggers Lily Abood, Ben Jervey, and Adam Taylor are writing from the road this week while biking 350 miles to raise awareness of climate change issues. This post is the second in the Mother Jones Ride350 Dispatch series.]

We woke up in Arcata, CA at the crack of dawn yesterday. Bleary-eyed and disheveled, surrounded by half-packed bags and well-lubricated bicycles, we found ourselves greeted by dozens of residents and community leaders who were so excited we were there I thought I was still dreaming. (And, since I felt like I was dreaming the entire day, I can’t say that I’ll do much of a job recounting it—so it’d probably be better to read former MoJo web guru Nick Aster’s post about our first day on the road.)

What I can say is that being greeted by dozens of strangers, in a place you’ve never been before, who are shaking your hand, handing you warm cups of coffee (in porcelain cups, no less), feeding you fresh, locally made bagels, and telling you that they are so honored to have you in their town, is a really humbling experience. I mean, really? You’re excited to have me here?

Most days I sit in front of a computer, trying to track down people I want to talk to. I email across the country, I ride mass transit with a bunch of grumpy faced iPhone users, and I feel pretty darn isolated in my cubicle life. But, not yesterday.

And that same uncommonly wonderful feeling of being welcomed and appreciated has continued into today. From the chain-smoking mother sitting in front of her RV trailer at the campground wishing us good luck, and reminding us girls to “be safe out there,” to the unique collection of locals who have approached us to ask if we’re those folks they saw on TV, everyone in these wild little CA towns seem genuinely excited that we’re here.

And—here comes the fun part: Most of them want to know what the hell we’re doing and what that number “350” means.

My favorite encounter of the day was meeting the fine folks who run the Avenue Cafe in Miranda on Highway 101. Genuinely good people through and through, and generous as can be. After a 30-mile ride through the Avenue of the Giants, the team rolled into Miranda without a clue. Eyeing the sunny picnic benches on the patio at the Avenue Cafe, I popped my head in and asked if they’d mind hosting us and our sandwiches if we bought a drink or two. The invitation to stay was quickly followed by two baskets of bread sticks (yum) and a large cheese pizza from the chef.

Three of the staff came out to talk to us about the ride, and 350 ppm (they’ve heard of us too!), and what they’re doing to lessen their impact. The manager proudly explained that he makes weekly runs of recycling to the collection center and donates the money to the local school, but he wants to get solar power panels installed, and do more to green their building. Small steps, he admits, but “everybody’s got to do their part.”—Lily

Adam Taylor is a green building consultant in San Francisco. While a bicycle enthusiast, he has never done anything like Ride350 before in his life—you can tell by looking at his legs. Ben Jervey is a journalist, activist, world traveler, great wedding dancer, and looks great in spandex. Lily Abood has worked with nonprofits in the Bay Area for 10 years (including her current role as Mother Jones’ Major Gifts Officer). She plans to hug a lot of CA redwoods while she’s on this adventure. For more information about the entire Ride350 team, check out the rider profiles here.