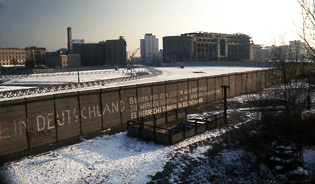 Today, November 9, is the twentieth anniversary of the fall of the Berlin Wall. I would like to associate myself with these comments by Matt Yglesias:

It’s hard to think of non-cliché things to say on the 20th anniversary of the fall of the Berlin Wall…. [Life in East Germany in its final days] is the subject of two excellent films, Good Bye, Lenin! and The Lives of Others, that everyone should see. I’m not really clear how representative daily life in the GDR was of everyday existence in other Eastern Bloc countries, but since as far as I know there aren’t excellent movies about daily life in Communist Poland or Communist Bulgaria this is probably how we’ll remember things.

One somewhat clichéd idea about November 9 that’s still worth considering today is the argument that in the grand scheme of things, 11/9 was more historically significant than 9/11. Victor Sebestyen, who has written a book about the revolutions of 1989, has a decent column on this subject over at the Guardian. I especially liked this part of his argument:

Last, but not least, 9 November was gloriously happy. Anything seemed possible that night. 11 September was a day that sparked panic and fear. I know which is a better 9/11 to remember.

We can probably all agree on that.