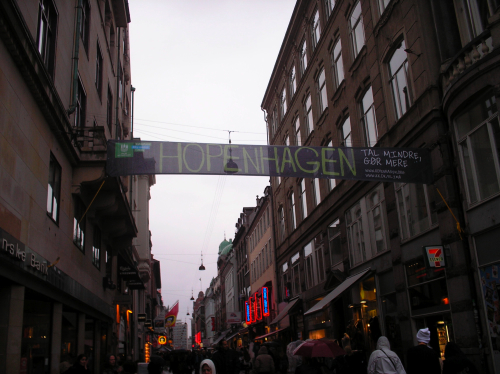 The climate summit that kicks off in Copenhagen next week may turn out to be more eventful than you might expect, thanks to significant promises from the US and China in recent days.

Last week, the White House confirmed that Obama will make a pit stop at the summit and announce that the United States is committing to reducing planet-warming emissions in the neighborhood of 17 percent below 2005 levels by 2020.

The next day, the Chinese government announced a goal of reducing their carbon intensity—the amount of greenhouse gas emitted per unit of gross domestic product—by up to 45 percent below 2005 levels by 2020. Since the US and China together are responsible for 40 percent of the world’s emissions, these commitments are expected to have a real impact on the negotiations.

That’s not to say that these goals are as ambitious as they could be, though. The Chinese target doesn’t represent an absolute reduction in emissions. It’s based on reducing emissions in relation to GDP—meaning that total emissions can continue to rise as China’s economy grows.

And the US target is still far lower than those set by our European counterparts and those that the developing world has called for. Most of the rest of the world is working to get emissions below 1990 levels. The EU, for instance, has committed to slashing emissions 20 percent under 1990 levels by 2020 and has said it would go to 30 percent if other nations follow suit. The US cuts are only around 4 percent below 1990 levels. When world leaders agreed on the Kyoto Protocol in 1997, the Clinton administration promised to reduce emissions 7 percent below 1990 levels by 2012, although of course the Senate later scuttled that plan.

Still, these are the first meaningful, concrete numbers that the US and China have put on the table, raising hopes that the summit will make some advances even in the absence of a binding treaty.

The summit’s host government in Denmark released its draft proposal today outlining what an agreement at the end of the two-week summit should look like. The draft calls for reducing global greenhouse gas emissions 50 percent by 2050 from 1990 levels. The bulk of those cuts would come from industrialized nations, which would need to cut emissions roughly 80 percent by 2050. The draft also proposes that total worldwide emissions should peak in 2020, decline thereafter, and global average temperature should not rise more than 2 degrees Celsius (3.6 degrees Farenheit).

Danish Prime Minister Lars Lokke Rasmussen said he expects a five to eight page “politically binding” agreement to emerge from the summit, ideally one that includes 2020 targets for rich nations. He’s also calling for a 2010 deadline for a final treaty.