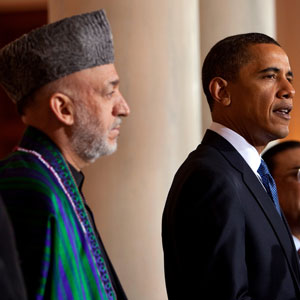 President Barack Obama is still working on his big decision: what to do about the Afghanistan war? On Wednesday, he held another Situation Room strategy session with his national security team. The day before, press secretary Robert Gibbs, said that Obama was pondering four options, without describing these alternatives. Media reports had suggested that each one involved deploying more troops. But hours following this latest AfPak gathering, AP reported that Obama had rejected all four options, and the news leaked that the US ambassador in Kabul, Karl Eikenberry, had sent two classified cables to Washington noting he was deeply concerned about dispatching additional troops to Afghanistan until the government of President Hamid Karzai demonstrates that it’s serious about addressing corruption and incompetence.

These new developments, coming late in Obama’s reassessment of Afghanistan policy, may have upended the review process, as Obama was leaving for a trip to Asia. They do not mean that ordering more soldiers to Afghanistan is now off the table. Yet with polls showing the public skeptical of a troop buildup in Afghanistan, any move on Obama’s part to expand the war will be a hard sell. But because the situation in Afghanistan and Pakistan is so complex and the policy options so difficult to sort through, the president may have a shot at winning over the public for whatever course he chooses—or at least a chance of winning time to implement his decision before public opinion turns against him. To do either, he will have to ensure that his White House does not tumble into a credibility gap, for if American voters come to believe Obama is not telling the truth about Afghanistan, they will be much less inclined to support his policy or to cut him any slack. Already there are signs—including those Eikenberry cables—that the Obama administration could encounter trouble on the credibility front.

The term “credibility gap” came into popular use during the Vietnam War, when President Lyndon Johnson, other government officials, and military leaders repeatedly issued positive statements about the war that were dramatically at odds with the reality on the ground. As Johnson and later President Richard Nixon prosecuted a tough and controversial war, it was not easy for them to level with the public about the conflict without running the risk of losing support for the effort. Four decades later, Obama is struggling with a similar dynamic.

This challenge was on public display last week, during Gibbs’ daily briefing of the White House press corps. That Monday the news was that Abdullah Abdullah, the leading challenger to Karzai, had pulled out of the run-off election, noting that he had expected to face massive fraud, which had marred the first round of voting. Abdullah’s retreat was clearly an indicator that the Afghanistan political system does not work. Peter Galbraith, who was the deputy head of the United Nations mission in Afghanistan until he complained too vociferously in public about the corruption tainting the presidential election, said that Abdullah was right to retreat:

The run-off was certain to be more fraudulent than the Aug. 20 vote with more ghost polling centers and the same corrupt officials in charge. We are now stuck with the same corrupt and inefficient Karzai that we had for the last seven years but now he is also rightly seen as illegitimate by a large segment of the Afghan population and by public opinion in the troop contributing countries. No amount of spin can obscure the fact that we spent upwards of $200 million on an election that has been a total fiasco.

A fiasco? Gibbs and the White House presented a very different view. Obama’s press secretary declared that “the laws of Afghanistan and the institutions of Afghanistan” had “prevailed.” He noted that Karzai was now “the legitimate leader of the country.” Reporters pressed Gibbs, with one asking if “there is a sense of legitimacy…among the Afghan people for the Karzai government.” The press secretary replied, “I have no reason to believe there is not.”

Gibbs explained the administration’s reasoning: because an election council in Afghanistan had acknowledged misconduct in the first round, ordered a run-off, and Karzai accepted this decision (after Senator John Kerry leaned on him), the system had worked. Gibbs would not acknowledge that Abdullah’s decision to leave the race to avoid being overwhelmed by fraud showed that the Karzai government remained profoundly corrupt. “I don’t know how you could presume something was going to happen before it did,” Gibbs said.

At the same time, though, Gibbs emphasized the Obama’s administration’s desire to work with a strong, effective, and honest partner in Afghanistan. That caused a journalist to inquire, “Would it be accurate to say then that thousands of American troops are on duty in a country that’s led by a guy who is not credible, not reliable, and running a corrupt government?” A short and truthful answer would have been, yes. But Gibbs replied, “I didn’t say that.” Which was technically true: he hadn’t uttered those words. But he was dodging recognition of the truth.

Toward the end of this briefing, another reporter took one more stab at the question, asking if Abdullah’s move signaled that Afghanistan cannot actually mount a national election without fraud. Gibbs noted, “this process we knew all along was not going to be an easy one.” But he also said he was confident that the parliamentary and district elections scheduled for next year will be free and fair. But in the wake of an election thwarted by fraud, how could he and Obama assume this?

Gibbs was trapped in a disconnect: a candidate had been pushed out of an election widely expected to be marked by tremendous fraud, but the White House was saying that politics in Afghanistan were improving. This is the sort of gulf between reality and rhetoric that can undermine Obama’s policy. And a week after Gibbs was practically hailing developments in Afghanistan, Eikenberry’s leaked cables undercut the White House line. Of course, as the president spends American lives and billions of dollars on this war, he cannot say, “We’re screwed in Afghanistan and we’re stuck with a corrupt and bumbling government.” Such extreme candor would not put soldiers or taxpayers in the mood for sacrifice. But Obama and his aides must find a way to convey to the public that they do acknowledge what’s truly going on, while still inspiring Americans to support the endeavor.

They have yet to find that groove. In past weeks, the White House has insisted that it will not pull out of Afghanistan, yet it has simultaneously noted that it can only succeed if it has a partner that “is free of corruption and transparent.” (What happens if there is no such partner? The White House won’t say.) The administraion has set up a daunting to-do list in Afghanistan—guaranteeing there is a working and honest government, an effective security force, and no safe haven for terrorists—while stating, as Gibbs put it, “our commitment can’t be forever.” (Those missions could take close-to-forever to accomplish.) And when Gibbs was asked if Obama has made good on the promise he stated in March to set “clear benchmarks” on anti-corruption efforts for the Afghan government, the press secretary could only reply that “conversations are being had.” But by defending the election process in Afghanistan, the White House seemed to be stepping from routine political spin toward public denial of reality.

No doubt, Gibbs and other Obama officials realize they are walking a fine line. (They must know that Abdullah’s abdication showed that the Afghanistan political system remains crooked; they just don’t believe it would be helpful to admit that.) And that line will likely get finer, for everything that Obama and the White House say about Afghanistan in the coming weeks will receive greater scrutiny. There’s nothing like the prospect of increased troop deployments to a once-forgotten war to win increased public attention for a dragged-out military endeavor in a little-understood part of the world.

The honest policy wonks in and outside the administration who focus on Afghanistan and Pakistan, even as they disagree with each other, usually say there’s no telling if one particular course of action will work. The experts have nothing but best guesses. Which makes Obama’s decision all the more difficult. But one thing’s for sure: Afghanistan is a political minefield for Obama. Many within his own party don’t want him to deploy more troops; Republicans are looking for opportunities to blast his handling of the war. And the public is torn. As Obama threads both the policy and the political needles, he and his aides will have to ponder how best to persuade the voters they are proceeding with eyes wide open about what’s occurring on the ground in this far-away place. Especially after the previous administration, Obama will only be able to win support for his policy—whatever it turns out to be—if the public perceives it is reality-based. Given how discouraging the reality is in Afghanistan, this will be one of the most daunting tasks of Obama’s presidency.