From economist-blogger Arnold Kling’s 50-page paper on the financial crisis: 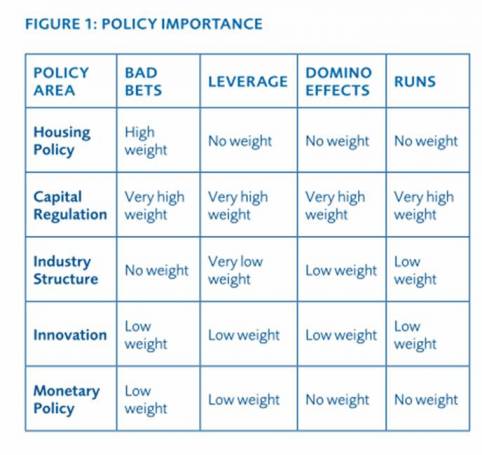 Basically, Kling says that the crisis was composed of the things along the top, which were caused by the things on the left. You can see that he places the blame squarely on poor capital requirements regulations, which gave various banks incentives to (a) originate-to-distribute instead of originate-to-hold; (b) securitize every which way they could; (c) use credit default swaps to reduce capital requirements even further; (d) stuff toxic securities into SIVs; etc.

Because he believes that weak capital requirements (which determine how much capital banks must have on hand in relation to their liabilities) were central to the crisis, Kling thinks we should “encourage financial structures that involve less debt, so that resolution of failures is less complicated” and try to “foster a set of small, diverse financial institutions.” Kwak mostly agrees with Kling’s recommendations, but thinks that Kling should have put more emphasis on making “key institutions” smaller. In any case, you should be reading both of them.