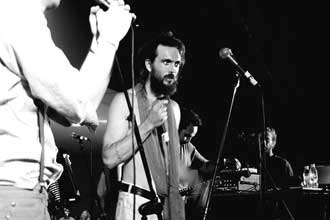 When Alexander Ebert performs with his new, 10-plus-member band Edward Sharpe and the Magnetic Zeros, he does so barefoot, sometimes shirtless, and with his long wavy hair tousled into a messy bun of sorts. (Rolling Stone referred to the ensemble as an “L.A. hippie clan.”) Ebert’s lack of footwear and clothing facilitate his desire to gleefully jump about the stage leading a unique ensemble of vocalists and horn, piano, accordion, tambourine, and banjo players that put on warm yet captivating live shows. After releasing their debut album Up From Below last August, the Zeros launched a cross-country tour and sold out nearly every show to hand-clapping, foot-stomping fans who can’t get enough. Now, they’re working on an epic, 12-part rock opera and hoping to put out one, if not two new albums this year. I spoke with Ebert, 31, about the origins of his talents, the dark side of signing to Virgin Records with Ima Robot, and what it means to be driving what some consider a folk-rock revolution.

Mother Jones: How did you first become interested in music?

Alexander Ebert: I took a lot of long summer road trips with my dad, and the mix of music we listened to on the road skipped around from classical to Western to new age to hyper-cinematic. You know, Patsy Cline, Willie Nelson, Johnny Cash, and 100 others. But when I was 7, I got really into hip-hop and was all about rapping and tagging. When I was 13 or 14, I started taking rap more seriously. I had loose affiliations with other hip-hop groups and some inroads, but I was too young and I lost interest. After ’94 I became totally disenchanted. The music coming out at that time was redundant and boring to me. It was no longer about the grit of making money. It was about the gloss and floss of having too much money.

MJ: Before the Zeros, you were lead singer for Ima Robot. How did that get started?

AE: At the time, I was really just doing music for the hell of it. I still had some hip hop friends and they did the beats and I did the vocals, but I honestly didn’t think I could sing. Ima Robot happened kind of accidentally. I was swept up in heroin then and such a wreck. I didn’t even have a key to my apartment so I would break in every night. Eventually I sobered up and started writing songs, but it was a really weird time for me. I had once been so spiritual, but then I became really dogmatic and political. I came to believe there was no God, no spirit. I only allowed myself to believe it what I could see, and it was a destructive process because I didn’t have any answers. Then Ima Robot got signed to a major record label.

MJ: What was it like to make it big, so to speak?

AE: It was a really strange experience. I quickly lost my grip on what the music was supposed to be about and began thinking only with A&R and the radio in mind. By our second album I’d gone from a whiney brat with something to say to a whiney brat with nothing to say. I felt like a robot, like I was ignoring my instincts and at the end of my rope. But then I had a sort of renaissance. I began asking myself, “What did I want to do as a kid?” I was in AA at this time, but I stopped going and for the first time in so long I felt wonder return to my eyes and my heart. The idea of love had been BS to me, but now it felt powerful again. Jade and I hooked up during this transition, and love was kind of something we rediscovered together. She and I began making music in its most elementary form–we sang in unison, sometimes out of key. We were making music with horns and strings and background vocals and percussion. And without even realizing it at first, this album and this band started happening. We were all friends of friends at the time and we slowly started to record the album at Nico and Aaron’s house.

MJ: How long did it take to record?

AE: Pro Tools was invented to quicken the recording process. The music we were making at this time was more organic, so it took us a year and a half to record on tape. The whole process was more about drinking good wine and eating delicious food and having fun than putting together a product. It was a really amazing time of creation. It was incredible. But there was also incredible sadness. Heath Ledger was supposed to put our album on what would have been a new record label. I still feel a little dead after losing him. He had this vigor, this “Boom! That’s a great idea, let’s do it!” attitude, this energy. He helped reawaken that in me and that’s one reason I really want to raise the fire and continue doing what we’re doing.

MJ: How did you transition from hanging out making music to where you are right now–at the tail end of a multicity, multicountry tour?

AE: I went on Craigslist and bought a bus for $9,000. I ripped out the inside, redid it, and we set out to play our first show together at a film festival in Marfa, Texas. No one really knew what to expect, but regardless, it was a pilgrimage. Marfa is near El Paso in West Texas and it was 1,984 miles there and back. That was a long, long bus ride, and the show was awful. The power went out by the fourth song; it just sucked. But the next day we got out our instruments at our Super 8 motel and just started playing. We walked through the streets of the town just playing. At some point we had marched into a ravine, and we’re standing there still playing, still singing, and I knew this was going to be something special.

MJ: So now that you guys have been on tour, you’ve built up a pretty solid following, sold out some 30 shows, what’s next?

AE: What we’ve been trying to do since the beginning of this climb is to not stray from the beauty and openness that started it. We want to keep things real and open and adventurous and be sure the spirit of joy is still in it. It’s not about Learjets and hotels. For us, it’s actually about the avoidance of hotels.

MJ: That’s a noble goal, but how will you achieve it? Especially when you weren’t able to keep the whims of the radio at bay in Ima Robot?

AE: I don’t have all the answers, but I’ve thought about this a lot. One way is to bring a big tent with us wherever we go—a traveling circus, so to speak—and perform in it across the country. We could also perform in public spaces like big parks or someone’s barn. Really, as long as the spirit is there, things will fall into place. And if we bring the venue along with us, then that’s even better. There are so many of us and so many sensitive souls in this band, that even if one of us tried to stray from this mission of ours, I don’t think we would let each other get away with it. We are too truthful with each other.

MJ: I’ve heard live Edward Sharpe shows are a cross between a cult gathering and a revival. How would you describe it?

AE: I wouldn’t say it’s like a cult; I’ve never heard that before. At its best, a live show is completely transcendent. The image I get is breaking through glass or shooting out into the free zone. We’ve played some really nice shows on a quiet level, like in Telluride, Colorado, for example. There was no piano, we were in a 200-person opera house, we had blankets on the floor and we sang the songs lightly, with delicacy. The songs flowered themselves. But then we do gusto shows on a variety of nights. Sometimes I’m really communicating with the audience and I’m hyper-engaged. Other times my eyes are closed and I just let it be what it is.

MJ: Who is the Edward Sharpe persona?

AE: Well the name Edward Sharpe just came to me, and I was really into physics and math, thus the magnetic zeros part, but as far as a persona, there is no persona. It’s just me. At this point in my life, I’ve peeled off enough layers of myself that what you get now is the real light bulb.