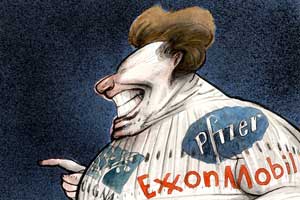 Despite the recent Supreme Court ruling that frees corporations to go as wild as they’d like in political campaign spending, a new report shows that this past year the money game was getting much worse all by itself. That could be one big reason the government has stopped working, it seems, altogether:

“The Center for Responsive Politics puts the total at nearly $3.5 billion, a five percent increase over 2008. The pharmaceutical and health-products industry spent nearly $267 million on lobbying, the greatest amount ever spent on lobbying efforts by a single industry. The Chamber of Commerce spent more than $144 million dollars on lobbying, a 60 percent increase over 2008. Other big spenders on lobbying included ExxonMobil, the Pharmaceutical Research and Manufacturers of America, or PHARMA, General Electric, Pfizer, Blue Cross/Blue Shield, AARP, the American Medical Association, Chevron, the National Association of Realtors, and the American Beverage Association. Says Sheila Krumholz of the Center for Responsive Politics, “Lobbying appears recession proof. Even when companies are scaling back other operations, many view lobbying as a critical tool in protecting their future interests.”

Art for The Nation