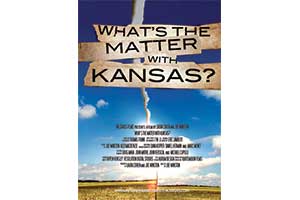 In his 2004 book, What’s the Matter With Kansas?, Thomas Frank probed the psyches of Midwestern “values voters” to explain why blue-collar Americans abandoned economic self-interest to vote for George W. Bush. This eponymous documentary begins as a retelling of Frank’s book but ends as a timely exploration of how an obsession with a narrow moral agenda can be self-defeating.

Much of the film revolves around the Dillards and the Bardens, likable families who belong to the congregation of Terry Fox, a Baptist preacher who’s been ousted from his church for his right-wing politics. The families follow him to a new house of worship in a gaudy auditorium in Wichita’s Wild West World theme park. Fox convinces them to pour their savings into the park, which goes bankrupt under a cloud of suspicion. Still, this betrayal doesn’t cause the Dillards and Bardens to question Fox or his beliefs.

There are fleeting hints of a shifting political climate. Hard times during the Bush years convince “redneck” farmer Donn Teske to forsake the GOP, declare himself a “populist without a party,” and even praise the New Deal. Yet the film ends with a home-schooled Fox follower declaring that the framers believed “that our country needed to be founded on Christian principles” and a mention of the murder of Wichita abortion provider Dr. George Tiller. We’re left to draw our own conclusions about what the next chapter of this story may be, but in the age of Tea Party populism and a reenergized conservative base, it’s hard to see Kansas making an about-face.