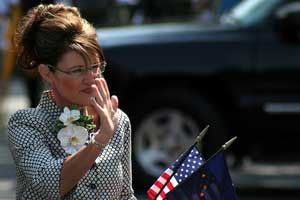 When Sarah Palin campaigned in 2008, she declared that she would bring “transparency” to Washington, DC. Yet her actions as governor of Alaska may ultimately eviscerate that state’s open records laws.

Last month, a Superior Court judge in Alaska named Patrick McKay issued a decision sought by Palin. His ruling has the potential to undermine—perhaps even destroy—transparency within the Alaska state government.

McKay had presided over the appeal in a case initially brought against Palin in 2008 by Andrée McLeod, a self-styled good-government advocate in Alaska. While Palin was campaigning as John McCain’s running mate, McLeod, a former Alaska Republican Party official, filed public records requests for emails regarding state business that were sent to or from Palin’s official and private email accounts, as well as to and from Todd Palin‘s private email account. McLeod contended that Palin and her office had an obligation under two Alaska state laws—the Public Records Act and the Records Management Act—to preserve emails related to official business, whether they went through state or private accounts. (Governor Palin used her private account to conduct plenty of state business.) McLeod asked that the court declare that these emails were indeed public records—which would render them available to public inspection under the state’s open records law—and that the court instruct state officials to stop using private email accounts to conduct state business.

Palin fought McLeod’s effort. And the trial court judge who heard the case, Jack Smith, shot down McLeod in August 2009. Smith maintained that state law defined public records as material “developed or received by a public agency…and that are preserved for their informational value.” He essentially ruled that because emails to and from private accounts had not been preserved as public records they did not have to be treated as public records. And that meant—in sort of a catch-22—they didn’t have to be preserved (or made public, under the open records law). Smith also noted that since these emails were not public records, state officials could not be ordered not to generate them.

This decision created a giant loophole. If Alaska state officials want to keep any of their official conduct secret, they can simply use private email accounts for these matters. Under the decision, no state record would actually be a state record unless a state official decided to preserve it. Consequently, state officials could simply keep records off-limits by not preserving them. McLeod appealed.

And Judge McKay enshrined and widened this loophole. He ruled that “public records are those items that are affirmatively preserved.” And, he added, it was up to state agencies to determine which records are “worthy of preservation.” McKay even acknowledged this might lead to trouble:

Plaintiff argues that…[under this reading of the law] agencies can transform public records into non-public records simply by not preserving them as required. Presumably, McLeod worries that this would darken the government’s transparency and hide decisions from public view. She may be correct.

But McKay insisted that this still was the proper reading of the existing law, adding that it was up to the legislature to change it. He aso conceded his decision could lead to state officials destroying records:

This Court must therefore conclude that not every email related to the conduct of state business is a “public record.” There is an element of discretion, and if the Governor and her staff chose not to preserve certain emails—for whatever reason and regardless of intention—those emails are not public records, and not available for McLeod’s inspection. This is, of course, a very different question than whether the Governor acted properly in not preserving certain emails.

McKay’s decision concerned emails, but it could also apply to other state records. The ruling, according to Don Mitchell, McLeod’s attorney, “implied that a state agency has total discretion to decide to ‘preserve’ or not ‘preserve,’ even if the decision to not ‘preserve’ is made with bad motive (i.e., to prevent the public and the Alaska press from discovering that the emails even exist).” He adds that if this decision stands, it would “blow the bejesus out of the Alaska Public Records Act.” Every state agency, Mitchell says, “would have the legal right to shred.”

In a motion for reconsideration, Mitchell notes that McKay’s ruling “transcends” the disagreement over the use of private email accounts and “guts…the entire Public Records and Records Management Acts.” He cites state law that defines a public record as material that has been “preserved” or is “appropriate for preservation,” noting that the latter would apply to most emails and documents related to official business. Mitchell expects McKay to deny this motion. His next stop: the Alaska Supreme Court.

The case, Mitchell warns, should be troubling to Alaska journalists and any state residents who value open government. But, he says, members of the Alaska state legislature generally do not seem eager to propose a legislative remedy, should McKay’s decision stand.

The impact of this court decision has not yet hit. This month, MSNBC.com obtained from the Alaskan state government 1,200 emails—nearly 3,000 pages of correspondence—that Todd Palin exchanged with state officials. The emails showed that the so-called First Dude was involved in key official actions. (Another 243 emails were withheld by the state, under a claim of executive privilege.) And the state is currently processing—which presumably entails preserving—Sarah Palin’s emails (from her official and private accounts) in response to long-standing media requests for that material.

Yet because Palin used private email accounts for state business and subsequently fought a legal effort to force her to reveal those emails and to cease that practice, the state’s open records law may ultimately be rendered irrelevant. This could be part of her Alaska legacy: transparency in tatters.