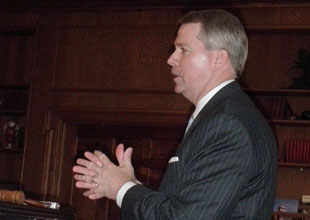 There have been some ugly scenes outside the Capitol this weekend as angry Tea Partiers have hurled racist and homophobic slurs at Democratic lawmakers who support health care reform. And on Sunday afternoon House Republicans cheered on these conservative activists from the balcony of the Capitol building.

Rep. Gresham Barrett, a South Carolina Republican, stood on the balcony to wave and cheer as the Tea Partiers chanted below. “These people came up to fight for what they think is right, and I support their position,” Barrett said.

Yesterday there were reports that civil rights leader Rep. John Lewis had been called a “nigger” by protesters and that another black congressman had been spat on by a demonstrator. When asked what he thought of such incidents, Barrett simply responded: “I know emotions are running high.” He quickly added that he didn’t condone “any kind of degradating [sic] activity,” but said “it’s an emotional issue for a lot of people in America today.”

Barrett was joined by many of his Republican colleagues who walked out onto the balcony to show their solidarity with conservative activists as the House began its preliminary proceedings on the health care bill. Reps. Tom Latham, Jason Chaffetz, and Chris Lee held up handmade signs on notebook paper that read, “kill…the…bill.” House Republican offices also hung up anti-health reform signs on the windows facing the plaza where the protestors were gathered.

“I just want to tell them there’s some people up here with them, we’re with them—and we’re going to be with them ‘til the bitter end,” said
Barrett.

Earlier on Sunday, protestors infiltrated a press gathering to heckle House Speaker Nancy Pelosi after the Democratic caucus meeting. Another
demonstrator disrupted a Fox News interview between Greta van Susteren and Rep. Barney Frank. “You want to destroy America!” yelled a middle-aged man crouched on the floor as Frank was discussing the “anger, hatred, and bigotry” on display when he was heckled with homophobic chants earlier this weekend.

“This is Fox, not CNN—are you sure you want to interrupt?” Frank said to the protester. He said later that he was “disappointed” with the Republican leadership for fanning the flames. “It’s like the Salem witch trials—the health care bill has become their witch. It’s a supernatural force, and we’ve got hysteria.”