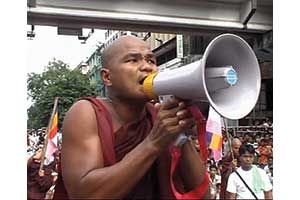 Man, it’s been, like, four days since I talked about Burma. But this time I bring it up only as your helpful human rights TV guide. Burma VJ, the Oscar-nominated documentary (it lost to The Cove) about the underground video journalists from the Democratic Voice of Burma who captured and smuggled out footage of the 2007 Saffron Revolution, airs on HBO tonight at 9:30. Which reminds me to recommend also checking out Total Denial, an excellent film about Burmese civilians vs. a US oil company plundering the country’s vast resources that, as a bonus, does not end on a note of complete soul-crushing despair. And that recommendation led me to ask some MoJo staffers for other not-to-be-missed movies about human rights.

Jen Phillips suggested the exposé of NY’s subway-dwelling homeless, In Search of the Mole People, and Paradise Lost: The Child Murders at Robin Hood Hills, the film that kicked off more than a decade of activism around the West Memphis Three. She also recommended Born Into Brothels, as did several other staffers. For an amazing doc about South Africa, Dave Gilson submitted Amandla!, and The Farm for a look into life at Louisiana’s Angola prison, which has held several men of questionable guilt in solitary for several decades. David Corn brought up great oldie-but-goodie Vietnam pic Hearts and Minds, as well as the more recent Taxi to the Dark Side and Spike Lee’s When the Levees Broke. Monika Bauerlein’s fave The Times of Harvey Milk is conveniently watchable on Hulu. Anna Pulley likes Border Echoes, a documentary about the Juárez women’s murders, for the will-make-you-cry-in-public win.

That’s a lot of quality TV-learnin’. And tonight’s HBO airing comes at a good time. Aye Chan Naing, executive director and chief editor of Democratic Voice of Burma, tells me the video journalists are still at it and have already started extensive coverage in the run-up to the coming elections—Burma’s first in 20 years. “We are broadcasting several different election-related programs per week, such as debate and round-table discussion with oppositions and politicians from inside Burma, interviews with journalists and writers, et cetera,” he says. Obviously, only freaks like me are interested in that kind of stuff right now, but if you’d like to meet the sources media will rely on for footage when the election shit hits the fan—and the front pages—later this year, Burma VJ will introduce you them.