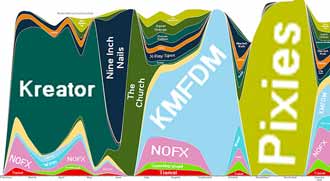 ClintJCL is obsessed with gathering data. Personal data. He catalogues every TV series he watches, and every movie. He posts a lot on Flickr. He blogs. He compiles monthly summaries of all of his activities. And, for the past decade, he has meticulously documented his listening habits—down to the song—and charted them.

“I like to be able to reflect back on what I did,” Clint explains via email. “Do most people know what they were listening to in 1982? Nope, and I don’t either. But I can at least change that, moving forward, by generating one of these each year.” (By one of these, he means one of these oddly bulbous listening charts: You can see the blown-up version here.)

ClintJCL won’t tell me his actual last name, which is kinda incongruous, given how much he advertises about himself online. (As of last night, if you’d googled him, you’d have gotten 22,200 hits.) I know, for instance, that Clint is a 36-year-old born on January 13, 1974 (during the Super Bowl). I know the names and birth dates of his parents and his sister, Britt. I know that he leans libertarian, and that he met his wife, Carolyn, on a pre-Internet computer bulletin board service—even though they went to the same high school. I also know that Clint is 5-foot-9, 150 lbs, with hazel eyes and frizzy brown hair—and that he hails from Woodbridge, Virginia. Then again, this could all be an elaborate hoax; for all I really know, Clint is a very clever 15-year-old girl from Seattle.

But I can tell you with reasonable certainty that Clint’s favorite band is the Pixies, even though he claims on his old personal-data page that it’s the Misfits. That’s because he’s a self-described “power user” of Lastfm, a Pandora-esque website that “scobs” up data on everything you listen to on your various digital devices. You can view his stats and learn that, over the past 12 months, Clint has logged a whopping 22,673 Pixies listens—which, when you do the math, shakes out to about 62 Pixies songs a day. The runner up (KMFDM at 13,736 listens) doesn’t even come close. The Misfits are way down at position 41, with a paltry 195. Simple Minds and the Weirdos got only five.

In one of his emails, Clint mentions something that might explain what I’ll call the Pixies anomaly: “I also keep a list of every concert I’ve ever been to, and I use a custom-tailored playlist-generation system that I programmed myself. Prior to any concert, I dump an entire band’s discography into my playlist, along with whatever other music I’m currently learning. I mark songs off as I learn them, so that I can focus on the ones I don’t know. I check setlist.fm repeatedly, and try to find out what songs bands play on their tour, so I can further refine my playlists to more accurately capture what will be played live. It’s always a race when I’m holding a ticket.” And from the concert page, you’ll see that Clint saw the Pixies back in December. You’ll also see a list of all the songs they played.

Which is all kind of geekingly awesome—though I can’t imagine how anyone has the time for such things. “I think it’s crucial to capture data snapshots of who we are, because a person is not the same person 10 years later,” Clint adds. “For me it’s a form of self-reflection.”

And for the voyeur, simply browsing through a few of the more than 2,100 bands that make up Clint’s highly documented audio universe is a form of self-reflection, too. It’s pretty much guaranteed to bring back mildly embarrassing high-school memories. Haircut One Hundred, anyone?