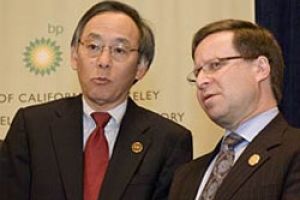 Is Steven Chu too cozy with BP? The oil spill is casting a spotlight on the Energy Secretary’s close ties with the oil company, which funded the Energy Biosciences Institute at UC Berkeley that Chu founded a year before he joined the DOE. BP’s decision to underwrite Chu’s institute with a $500 million grant was made by its chief scientist, Steven Koonin, whom Chu last year named his DOE undersecretary for science.

“The fact that Steven Chu selected Steve Koonin, BP’s chief scientist, to be his undersecretary would predispose them to think that they could maybe negotiate with BP, could be more like partners regarding the oil cleanup,” Jennifer Washburn, the author of a forthcoming Center for American Progress report called, “Big Oil Goes to College,” told the New York Times. While the DOE doesn’t have jurisdiction over the spill, 150 people at its national laboratories have been working on it, and some consumer watchdogs have accused the department of reacting too slowly. Chu has also been an optimist regarding the clean-up and containment efforts, telling reporters two weeks ago that “things are looking up.”

In late 2008, just after Obama appointed Chu to the Energy Secretary post, I explored his ties to BP and speculated on how they might influence him:

Chu’s role in creating the Energy Biosciences Institute may inform his approach to governing the Department of Energy, a major governmental underwriter of research, and one that will face pressure to partner with corporations in pursuing technological solutions to climate change. As the incoming Obama administration prepares to spend liberally to develop cleaner sources of energy, the structure of corporate-government partnerships will determine how the profits of that research return to taxpayers, and how rigorously scientists evaluate the downsides of controversial technologies such as biofuels.

For now, at least, it remains unclear to what extent Chu has given BP favorable treatment, either in terms of crafting DOE’s research agenda or its response to the oil spill. But what’s clear is that the close ties are casting a shaddow over the agency, sowing doubt among the public that the government is truly an independent watchdog. The same concerns were raised by UC Berkeley professors regarding the Energy Biosciences Institute. At the time, biology professor Ignacio Chapela called the deal, “the coup de grace to the very idea of a university that can represent the best interest of the public.”