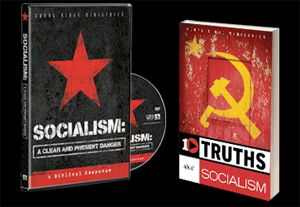 Meet the new religious right, same as the old religious right. Kinda sorta. Coral Ridge Ministries, a longtime player in the mission to Christianize (or, as they might put it, re-Christianize) America, is beating a new political drum. Its message is custom-tailored not to the Gospels, but to the alleged political mood of the US in these times. The argument: Socialism is ungodly. Barack Hussein Obama is a socialist. In fact, all Democrats are socialists. And Democrats run the government. Ergo, our government is ungodly.

So what do you do when you’re in possession of this ultimate truth and want to share it? Make a star-studded “documentary” titled “SOCIALISM: A CLEAR AND PRESENT DANGER…A Biblical Response.” And this video’s headliners are clearly the best judges of capitalism’s holiness; it stars: Michelle Bachmann! Steve Forbes! David Horowitz! Chuck Colson! Some blonde lady from Concerned Women for America! The founder of WorldNetDaily! Some dude who defected from the Chinese national basketball team! Plus, a quick-cut montage combining a bunch of angry rioting brown people, Fidel Castro, Hugo Chavez, and Barack Hussein Obama!

While that may not sound like a new meme to regular MoJo readers—or students of US Christian politics—its stridency and bald illogic (Jesus? A fan of wealth and an enemy of taxation? Have you not read Mark or Luke?) are new hat for the Ft. Lauderdale, Florida-based Coral Ridge Ministries (CRM)—which was set up in the ’70s by a granddaddy of the religious right and a fairly rigorous Presbyterian theologian, Dr. D. James Kennedy. (Full disclosure: Until his recent death, Kennedy was a pastor and friend to my wife’s family, all of whose members struggled in some way to square his friendship and Gospel message with his vengeful, firebrand political proselytzing.)

The Obama=Big Government Takeovers=Socialism=Communism=Stalin claptrap is no short-term ploy for media attention, either: CRM’s busy-bee writer-in-residence has opened a second front in this struggle against sound arguments, releasing two lightly researched and atrociously written books, RADICAL RULERS: The White House Elites Who Are Pushing America Toward Socialism and 10 Truths About Socialism (which states, “Socialism has failed wherever it has been tried,” then informs the reader with an asterisk that “the term ‘socialism’ is used interchangeably with ‘communism’ throughout this book”).

The mental gymnastics involved in believing these “truths” are truly Olympian. And they often make for strange bedfellows, as when a CRM minister explains in a short video that Glenn Beck, an unsaved Mormon, is right on the mark on the subject of theology and politics:

The phrase ‘social justice,’ as Beck accurately explained, is usually code for the view held by Karl Marx and socialists everywhere that inequalities of wealth are a wrong to be righted by force. It makes equality of results, not equality of opportunity, the ultimate goal. It’s also, frankly, loaded up with envy, a decidedly un-Christian attitude…Because socialism is unbiblical, churches that get derailed by Marxist ideas also historically abandon the supernatural gospel of salvation by faith in short order. Though Beck is a Mormon and not a biblical Christian, he’s right about one thing: You should flee from such a church.

So, why’s all this bosh and nonsense coming from a ministry that was founded by Kennedy, an intellectually capable Calvinist with a PhD from NYU—who once remarked, “Evangelical ministers [need] to be thoroughly educated and equipped to meet on equal terms anyone with whom they come in contact”?

He’s a fascinating study as evangelical firebrands go: A sinfully boastful man whose pride found harbor in a shrill right-leaning media empire. But my discussions with many of his former parishioners indicate that this was largely a stage persona, somewhat at odds with his theology, entirely tailored for its appeal to the unsaved masses. It worked in the 1970s and ’80s, when the Christian Coalition rose; it worked in the ’90s, when Republicans revolted and multiculturalism and “special rights” were attacked. And it’s certain to work now with Tea Partiers and racists, who won’t help but be warmed in the cockles of their hearts by that documentary’s opening Obama montage.

The founding fathers of the Christian right’s media age are dying: men like Kennedy and Falwell and Roberts and Swaggart, who, for all their obnoxiousness, hypocrisy, and human fallibility, recognized that the TV pastor’s role was as much entertainer as intoner. But who is replacing them? If CRM’s video and print onslaught are a true indication, the religious conservative media elite is being supplanted by faithful disciples of little mind, who don’t recognize the difference between the sideshow and the truth; for them, the sideshow is the truth. The theology, so far as it exists, is political anger. One wonders how this carbon copy of faith, standing in for faith itself, can be good for any soul—saved or otherwise.