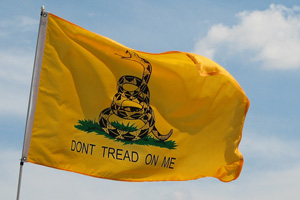 Usually Dick Armey gets worked up over things like taxes and the deficit. But at a June 16 symposium about the Tea Party movement, the former House majority leader and current chair of FreedomWorks was jumping out of his chair over something even more arcane: the Jones Act—a 1920s-era maritime law that bars foreign-flagged vessels from shuttling goods between American ports.

To hear Armey talk, the act—and President Obama’s support for it—are all that’s keeping eager Norwegian skimmers from mopping up the oil destined for Florida’s pristine sands. “How do you explain a president who does not waive the Jones Act on day one?” he fumed. “No press is even asking the questions.” His explanation: It’s a “silly little labor sop.”

During the past week, the Jones Act has become a big GOP talking point, with the likes of Oliver North, Dick Morris, and congressional GOP freshmen stepping up to bash Obama for his alleged shortsightedness. Obama, his critics insist, needs to follow the lead of—yes—his predecessor. “In the wake of Hurricane Katrina in 2005, the Bush administration didn’t hesitate to waive the law completely in an emergency,” John Fund wrote in the Wall Street Journal this week.

Just one problem with these arguments: They are almost entirely false.

Let’s start with this Bush business: It is true that Bush issued a Jones Act waiver post-Katrina. But he did so not to help relief efforts, but rather as a gift to the oil industry. The waiver allowed firms to use unregulated foreign vessels to ship oil and gas from local refineries that were damaged in the hurricane.

In fact, Bush waived the Jones Act at the same time he suspended anti-pollution laws for gasoline—hardly a humanitarian gesture. Whether the Jones waiver helped relief efforts at all is unclear—and was disputed even back then.

“You cannot find a person in Bush’s administration who can explain why that was a good idea, or how it helped,” says Mark Ruge, counsel to the Maritime Cabotage Task Force, a coalition of labor unions, shipbuilders and operators, and “pro-defense” organizations. Ruge says that the waiver may have enabled some foreign cruise ships to house displaced residents, but that didn’t require the sort of blanket waiver the GOP is now demanding from Obama. (His organization supports case-by-case waivers, as needed, to assist with the oil spill.)

Bush’s move also prompted Jones Act waiver requests from a host of unrelated companies who also wanted to utilize cheaper foreign shippers. In the same vein, freshman Hawaii Rep. Charles Djou—the GOP’s pit bull for this latest Obama attack—had actually campaigned on promises that he would introduce legislation to exempt his state from the Jones Act. The act was an issue for Djou and his fellow Hawaii Republicans long before the spill, since the state depends on ships for supplies, and critics of the act say it makes things more expensive for Hawaiians.

So, has the Jones Act really prevented the US from enlisting foreign help in the Gulf cleanup? Doesn’t seem so. On June 15, Adm. Thad Allen, the Coast Guard’s point man on the disaster, issued a press release noting that there are already 15 foreign-flagged ships working the spill—the act only applies to ships operating within three miles of shore, and there’s plenty of work to be done outside that boundary.

“While we have not seen any need to waive the Jones Act as part of this historic response, we continue to prepare for all possible scenarios,” Allen said. “Should any waivers be needed, we are prepared to process them as quickly as possible to allow vital spill response activities being undertaken by foreign-flagged vessels to continue without delay.” He added that no foreign entities have even requested a waiver—which can be granted if no suitable American vessels are available.

His statement has done little to quiet conservatives’ claims—particularly the notion that Obama won’t waive the act because he’s in bed with labor. On June 10, Heritage Foundation fellow Joseph Carafano set the tone for this accusation on Fox News, noting that foreign ships are being sidelined because “this is a big thing for unions. The unions see it as…protecting jobs. They hate when the Jones Act gets waived, and they pound on politicians when they do that.”

There’s a nugget of truth to the labor critique. Maritime unions did back Obama in 2008, and they are generally supportive of the Jones Act. But they take issue with suggestions that labor is putting politics over the Gulf cleanup. “To say the unions are standing in the way is completely unfounded,” says a spokesperson for the Seafarers International Union.

This wouldn’t be the first time the Jones Act has come under fire as a union-protection measure. Shipping companies that rely on foreign vessels have long hoped to amend the act so that they can compete domestically without paying US taxes or complying with domestic labor, environmental, or safety regulations. (Many of these, such as the Virginia-based Liberian International Ship and Corporate Registry, are American companies.) Firms that would prefer to save money by using foreign-registered ships have also griped about the Jones Act. In the mid-1990s, a group of such interests calling itself the “Jones Act Reform Coalition” tried—without success—to weaken the law.

There’s one big reason the Jones Act, this union-friendly protectionist measure, has managed to survive a frontal assault by big corporations: national security. The act’s requirements that domestic vessels be owned, registered, and built in America—and largely operated by US crews—ensures that there are sufficient working shipyards and skilled labor to supply the military’s needs. The Navy, for its part, relies heavily on commercial vessels to supply the fleet in war zones; in the Iraq fighting, merchant mariners moved 90 percent of the American combat cargo. That’s hardly a job the Pentagon wants to turn over to a bunch of leaky Liberian-flagged boats staffed with Somali teenagers earning slave wages.

In fact, given the GOP’s concerns about terrorism and the party’s historic love of all things military, it’s hard to imagine folks like Armey and members of Congress really wanting to open domestic shipping to foreign ships. Yet, in effect, that’s what they’re arguing for. Of course, had Obama waived the Jones Act on day one, as Armey suggests he should have, the same crowd likely would have accused him of sacrificing national security for the environment and a chance to export jobs to his European socialist friends.

Nope, Obama really can’t win on this one.

Read all of our BP coverage here.